Mr Nasser was arrested last April as part of a massive counter-terrorism operation in Liverpool and Manchester.

Deportation blocked
He was among 10 Pakistani nationals arrested.

The security services believed the men were planning to attack within days of their arrest, but Mr Naseer was not charged.

The government attempted to deport him and a second man, Ahmed Faraz Khan, 26, to Pakistan, but a judge blocked it on the grounds they could be tortured or face death in Pakistan.

Mr Naseer won his appeal to stay in the UK in May although the Special Immigration Appeals Commission (Siac) said it believed Mr Naseer had posed a serious threat to national security.

It found he had been sending e-mails to an «al-Qaeda operative» in Pakistan – the e-mails were said to be at the heart of a plot to bomb targets in north-west England.

But Mr Justice Mitting said it would be wrong to return him to Pakistan.

At the time, Home Secretary Theresa May said she was disappointed but would not be appealing against the ruling.

She said: «We are now taking all possible measures to ensure they do not engage in terrorist activity.»

The coalition government later announced it was to create a commission to review the UK’s Human Rights Act. 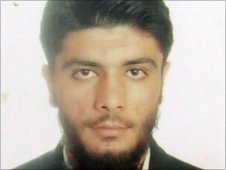 The US Justice Department has linked a failed plot to bomb the New York subway to the alleged UK conspiracy.

The hearing was adjourned until 14 July to allow Mr Naseer to consult lawyers over a possible bail application.

A Home Office spokeswoman said a full extradition request must be received and submitted to court within 65 days.

Another hearing was set for 8 September, when a judge will decide if Mr Naseer, 24, can be extradited. Home Secretary Theresa May will have the final say.

‘Significant threat’
Mr Nasser appeared at the City of Westminster Magistrates’ Court on Wednesday night, accused of planning attacks on Manchester city centre and communicating with al-Qaeda leaders behind the plot.

Mr Naseer, who used to live in Manchester, is also accused of conspiracy to use a destructive device.

Melanie Cumberland, for the US government, said he was alleged to have been an al-Qaeda operative who was motivated by «deeply held religious beliefs».

She said: «The conspiracy was co-ordinated by al-Qaeda leaders in Pakistan. The targets were in the US and in the UK.

«Mr Naseer’s particular involvement in the conspiracy is alleged to be that he and a number of associates prepared to carry out attacks between 15 and 20 April in Manchester city centre.»

Setting out US objections to any future bail application, Miss Cumberland said Mr Nasser was a «key part» of the UK conspiracy and posed a «significant threat» to the national security of the UK.

The US believes senior figures in al-Qaeda had co-ordinated both operations from Pakistan.

Suspects on the run
In the US, Mr Naseer will be accused of conspiring alongside other al-Qaeda suspects to bomb the New York subway system last year.

Senior officials in the US said the plot was one of the most dangerous since the 9/11 terror attacks.

Two men have admitted planning to detonate home-made suicide bombs and a third is waiting for trial.