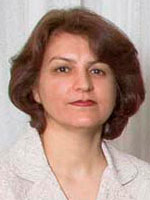 Mrs. Fariba Kamalabadi – arrested 14 May 2008 at her home in Tehran

Fariba Kamalabadi, 46, a developmental psychologist and mother of three, was denied the chance to study at a public university as a youth because of her Baha’i belief. Because of her volunteer work for the Baha’i community, she was arrested twice in recent years and held for periods of one and two months respectively before her arrest and imprisonment last May.

Mrs. Kamalbadi was born in Tehran on 12 September 1962. An excellent student, she graduated from high school with honors but was nevertheless barred from attending university. Instead, in her mid-30s, she embarked on an eight-year period of informal study and ultimately received an advanced degree in developmental psychology from the Baha’i Institute of Higher Education, an alternative institution established by the Baha’i community of Iran to provide higher education for its young people.

Mrs. Kamalabadi married fellow Baha’i Ruhollah Taefi in 1982. They have three children. Varqa Taefi, about 24, received a doctoral degree in political science and international relations in the United Kingdom and is currently continuing his research in China. Alhan Taefi, 23, has studied psychology at ABSI. Taraneh Taefi, 14, is a junior high school student in Tehran.

Mrs. Kamalabadi’s experience with persecution extends beyond her immediate situation. Her father was fired from his job as physician in the government health service in the 1980s because he was a Baha’i, and he was later imprisoned and tortured.