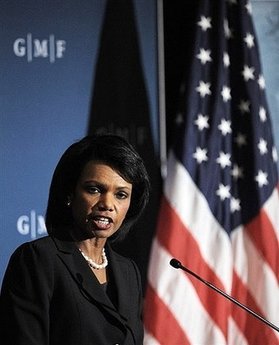 She rejected the idea that the United States and Russia are now engaged in a new Cold War, saying emphatically, «No, we are not.» And she sought to explain how Russia has evolved since the 1990s by noting that after the fall of the Soviet Union, many Russians «experienced a sense of dishonor and dislocation that we in the West did not fully appreciate.»

But «an acute sense of shame» over Russia’s diminished status in the ’90s «does not excuse Russian behavior» today, Rice said.

«What has become clear is that the legitimate goal of rebuilding the Russian state has taken a dark turn,» she said, citing a rollback of personal freedoms, pervasive corruption and a «paranoid, aggressive impulse» to view neighboring new democracies as threats.

Rice vowed that the United States and Europe «will resist any Russian attempt to consign sovereign nations and free peoples to some archaic ‘sphere of influence’ » and «will not allow Russia to wield a veto over the future of our Euro-Atlantic community.»
..
«The picture emerging from this pattern of behavior is that of a Russia increasingly authoritarian at home and aggressive abroad,» Rice said.