Pope Francis Leading His Flock to the Slaughter? 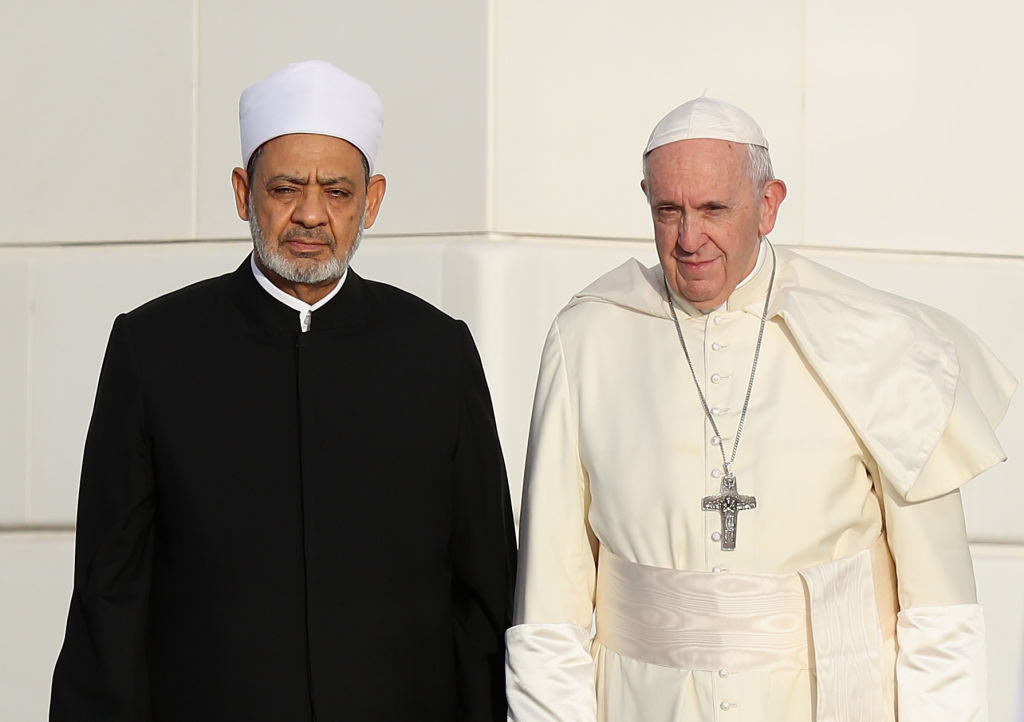 The two foremost representatives of Christianity and Islam, Pope Francis and Sheikh Ahmed al-Tayeb — the Grand Imam of Al Azhar who was once named the «most influential Muslim in the world» — just signed «A Document on Human Fraternity for World Peace and Living Together.» The Document «forcefully rejects,» to quote Vatican News, «any justification of violence undertaken in the name of God,» and affirms «respect for believers of different faiths, the condemnation of all discrimination, the need to protect all places of worship, and the right to religious liberty, as well as the recognition of the rights of women.»

The Document is being portrayed as a «historic pledge of fraternity» and applauded as a «historical breakthrough.» The problem is that one of the two men who signed it, Dr. al-Tayeb, has repeatedly contradicted — when speaking in Arabic and appearing on Arabic media — all the lofty sentiments it highlights.

The Document, for example, asserts that,

«Freedom is a right of every person: each individual enjoys the freedom of belief, thought, expression and action… the fact that people are forced to adhere to a certain religion or culture must be rejected, as too the imposition of a cultural way of life that others do not accept.»

Al-Tayeb, however, is on record saying that apostates — that is, anyone born to a Muslim father who wishes to leave Islam — should be punished. As to the penalty they deserve, in July 2016, during one of his televised programs, al-Tayeb reaffirmed that «Those learned in Islamic law [al-fuqaha] and the imams of the four schools of jurisprudence consider apostasy a crime and agree that the apostate must either renounce his apostasy or else be killed.» To underscore the point, he cited a hadith, or tradition, of Islam’s prophet, Muhammad, saying, «Whoever changes his Islamic religion, kill him.» (Sahih Al-Bukhari vol. 9 no.57)

If those are al-Tayeb’s views on religion freedom, what about his views concerning the «other» — people born non-Muslim? The document he co-signed with Pope Francis calls for «respect for believers of different faiths, the condemnation of all discrimination, the need to protect all places of worship, and the right to religious liberty.»

Yet, many liberals and Muslim reformers in Egypt insist that the «unprecedented persecution» experienced by Egypt’s Coptic Christian minority is directly traceable to the institution al-Tayeb heads: Al Azhar, the world’s pre-eminent Sunni university in Cairo.

After two churches, for instance, were bombed on Palm Sunday in 2017, killing 50 Christian worshippers, Dr. Islam al-Behery, a popular Muslim reformer, was interviewed on a Egyptian television program, Amr Adib’s Kul Youm («Every Day»). After offering various details concerning the radicalized curriculum of Al Azhar, al-Behery estimated that «70-80 percent of all terror in the last five years [in Egypt] is a product of Al Azhar.» To bolster his argument, al-Behery quoted from a standard Al Azhar text that said, «whoever kills an infidel, his blood is safeguarded, for the blood of an infidel and believer [Muslim] are not equal.»

According to al-Behery, Sheikh Muhammad Sayyid Tantawi (d. 2010), Egypt’s former grand imam and al-Tayeb’s predecessor, had, «without even being asked, removed all the old books and placed just one introductory book, [but] when al-Tayeb came, he got rid of that book and brought back all the old books, which are full of slaughter and bloodshed.»

«at this sensitive time — when murderous terrorists rest on [Islamic] texts and understandings of takfir [accusing Muslims of apostasy], murder, slaughter, and beheading — Al Azhar magazine is offering free of charge a book, the latter half of which and every page — indeed every few lines—ends with ‘whoever disbelieves, strike off his head'»?

The supposedly historic document al-Tayeb cosigned with Pope Francis, on the other hand, says that «we resolutely declare that religions must never incite war, hateful attitudes, hostility and extremism, nor must they incite violence or the shedding of blood.»

«It’s amazing, Al Azhar insists ISIS are Muslims and refuses to denounce them. Yet Al Azhar never ceases to shoot out statements accusing novelists, writers, thinkers — anyone who says anything that contradicts their views — of lapsing into a state of infidelity. But not when it comes to ISIS.»

It [Al Azhar] can’t [condemn ISIS as un-Islamic]. The Islamic State is a byproduct of Al Azhar’s programs. So can Al Azhar denounce itself as un-Islamic? Al Azhar says there must be a caliphate and that it is an obligation for the Muslim world [to establish it]. Al Azhar teaches the law of apostasy and killing the apostate. Al Azhar is hostile towards religious minorities, and teaches things such as not building churches, etc. Al Azhar upholds the institution of jizya [«protection money» demanded of non-Muslims subjects]. Al Azhar teaches stoning people. So can Al Azhar denounce itself as un-Islamic?

Al-Tayeb’s response to all these critics has been to accuse… Israel. During a March 2018 televised Egyptian interview, he said:

«I have noticed that they are always telling us that terrorism is Islamic. All those mouthpieces that croak — out of ignorance or because they were told to — that the Al-Azhar curricula are the cause of terrorism never talk about Israel, about Israel’s prisons, about the genocides perpetrated by the Zionist entity state… If not for the abuse of the region by means of the Zionist entity, there would never have been any problem.»

This is apparently the true face of Sheikh Ahmed al-Tayeb — at least as he is known in his Egyptian homeland, where he speaks Arabic freely and plainly — as opposed to when «dialoguing» with Western leaders who are all too eager to believe what they would like to hear. As the Cairo Institute for Human Rights noted in a statement:

«In March 2016, before the German parliament, Sheikh al-Tayeb made unequivocally clear that religious freedom is guaranteed by the Koran, while in Cairo he makes the exact opposite claims…. Combating terrorism and radical religious ideologies will not be accomplished by directing at the West and its international institutions religious dialogues that are open, support international peace and respect freedoms and rights, while internally promoting ideas that contribute to the dissemination of violent extremism through the media and educational curricula of Al Azhar and the mosques.»

It is difficult, therefore, to see this document as anything more than a superficial show, presumably for the West, and al-Tayeb’s signature not worth much.

If Sheikh al-Tayeb is dressed in disappointing sheep’s clothing, Pope Francis is apparently a starry-eyed shepherd leading his flock to the slaughter.

Raymond Ibrahim, author of the new book, Sword and Scimitar, Fourteen Centuries of War between Islam and the West, is a Distinguished Senior Fellow at the Gatestone Institute and a Judith Rosen Friedman Fellow at the Middle East Forum.

Pope Francis Leading His Flock to the Slaughter?
by Raymond Ibrahim
February 10, 2019 at 5:00 am