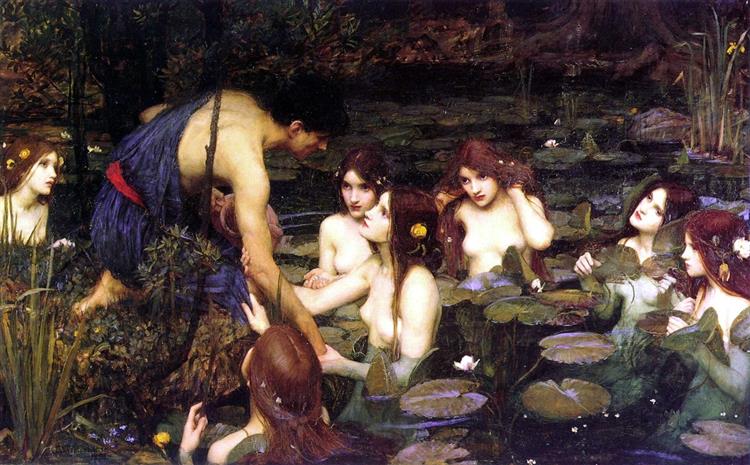 A gallery has temporarily removed a Victorian painting of naked adolescent girls in a move to «encourage debate» about how such images should be displayed in the modern age. Manchester Art Gallery has taken down Hylas and the Nymphs by JW Waterhouse. Curator Clare Gannaway said there were «tricky issues about gender, race and representation» in the gallery. «But we want to talk about that with people.» She denied accusations that the gallery was censoring the 1896 picture.

The decision has already sparked a heated reaction, however, with many on social media accusing the gallery of being puritanical and too politically correct. The painting was one of a number of similar pictures in a gallery area titled In Pursuit of Beauty, which Gannaway described as «very old-fashioned» because it depicts women as «either as passive beautiful objects or femmes fatales.» (…)

The painting’s initial removal was filmed to be made into a new piece of video art for artist Sonia Boyce’s exhibition at the gallery in March. Postcards of the painting were also taken out of the gallery shop. (..)

«Focusing on work from the mid-1990s to the present the exhibition will reflect Boyce’s move from her earlier drawing and collage which explored her own position as a black British woman, towards more improvised, collaborative ways of working. These unpredictable, open processes have been documented through a range of media including photography, film and wallpaper. The gallery has also commissioned Boyce to make a new collaborative live work for the exhibition.» (…)

The gallery’s interim director Amanda Wallace said: «We were hoping the experiment would stimulate discussion, and it’s fair to say we’ve had that in spades – and not just from local people but from art-lovers around the world. «Throughout the painting’s seven day absence, it’s been clear that many people feel very strongly about the issues raised, and we now plan to harness this strength of feeling for some further debate on these wider issues.» The gallery is now planning a series of public events «to encourage further debate.» (..)

Last week, in advance of a retrospective of Boyce’s work, a mediocre, semi-pornographic Victorian painting in  Manchester Art Gallery, was replaced with a notice explaining that a temporary space had been left “to prompt conversations about how we display and interpret artworks in Manchester’s public collection”. Members of the public have stuck Post-it notes on the wall giving their reaction.

But the response from some critics to the removal from public view of the painting, Hylas and the Nymphs by John William Waterhouse, has been a torrent of barely disguised contempt and ire, and accusations of censorship.

Such complaints willfully obscure the role that art institutions play in shaping our cultural identities through exhibitions and displays. Who chooses these important narratives and determines what is, or is not, a legitimate part of the national cultural story? At a time when Britain is painfully reconfiguring its identity in relation to Europe and the rest of the world, and campaigns such as Black Lives Matter and #MeToo are exposing once again the fault lines of racism and sexism, we need cultural institutions to be self-reflexive, and critical about the mirrors they hold up. Now, more than ever, museums should be questioning themselves and their audiences.

The Naked Ladies Are Back — but for How Long?