«Stay quiet and you’ll be okay» 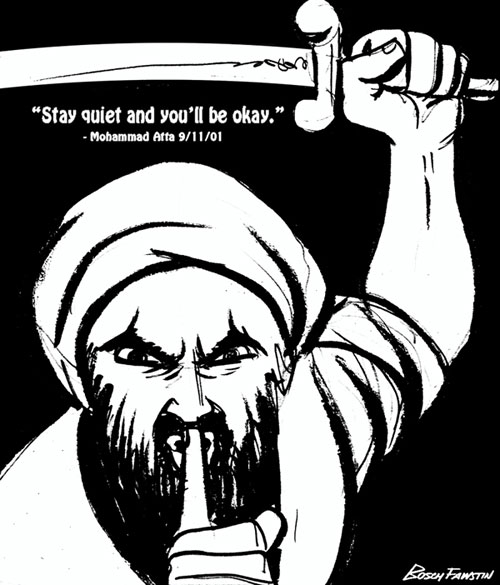 Not long after 9/11, some theatre group in Cincinnati announced a play contrasting a Palestinian suicide bomber and the American Jewish girl she killed. Local Muslims complained, and so the production was immediately canceled – because all the arty types who say we need «artists» with the «courage» to «explore» «transgressive» «ideas» fold like a cheap Bedouin tent when it comes to Islam. The Muslim community complained not because the play was anti-Muslim: au contraire, it was almost laughably pro-Palestinian, and the playwright considered the suicide bomber a far more sensitive sympathetic character than her dead Jewish victim.

But that wasn’t the point: the Muslim leaders didn’t care whether the play was pro- or anti-Islam: for them, Islam is beyond discussion. End of subject. And so it was.

So what kind of novels will PEN members be able to write in such a world?

Can Islam be made to live with the norms of free societies in which it now nests? Can Islam learn – or be forced – to suck it up the way Mormons, Catholics, Jews and everyone else do? If not, free societies will no longer be free. Pam Geller understands that, and has come up with her response. By contrast, Ed Miliband, Irwin Cotler, Francine Prose, Garry Trudeau and the trendy hipster social-media But boys who just canceled Mr Fawstin’s Facebook account* are surrendering our civilization. They may be more sophisticated, more urbane, more amusing dinner-party guests …but in the end they are trading our liberties.

«Stay quiet and you’ll be okay:» Those were Mohammed Atta’s words to his passengers on 9/11. And they’re what all the nice respectable types are telling us now.