The bitter cup of History

Time offers us a chalice, and to be real people in a real world, we must share it and drink it.

The bitterness is the taste of truth.

History is to the Western man something fundamental, ever since Herodotus. The chronicles of the past are more than just facts, a recording. Historical truth is inseparable from Truth. It is laden with meaning.

This meaning had deeper roots in times when metaphysics and religion were connected to hierarchies, on earth and in heaven. After the Holocaust Western civilization sought refuge in the authenic.

If the authentic is to be more than esthetics, it must carry an obligation within it. History and morals cannot be separated.

Embedded in the search for the authentic is an implicit expectation to share the pain. 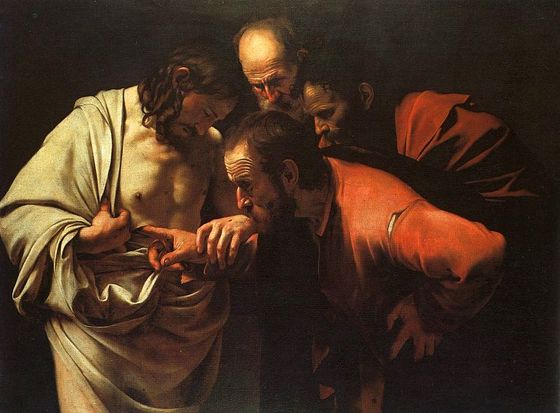 If liberal society is to share in the grief of Charlie Hebdo, it must do like the apostle Thomas and put its hands into their bleeding wounds. (Caravaggio)

Memory presupposes testimony and a sense of communion.

The world wants to be witness to the true history of Charlie Hebdo, to confirm and affirm the value of their sacrifice. To make sure that they did not die in vain.

This need for affirmation and testimony of them as martyrs is in a sense an emulation of another communion, an echo of the sacrifice Jesus Christ made on our behalf. When in a crisis we reenact what Christian Europe has done in the past.

There is hope connected to seeing them as martyrs. We hope that their deaths can have a redeeming power, and we can help make that happen. There are such hopes and yearnings stirring in the masses gathered in Paris and elsewhere.

Charlie Hebdo’s policy was foolhardy in the face of  a gathering storm. Few dared to follow in their footsteps. The threat was all too real. They challenged the growing power of islam in Europe, and their work was blasphemy in a deeper sense: of course they were disrespectful. Satire and disrespect is an inseparable part of liberal society. But society left them high and dry. They were on their own, and let us not fool ourselves: very few who today profess to be Charlie are willing to follow in their footsteps.

Those who hail them as martyrs for freedom of speech can only honour them by being willing to follow in their footsteps: not necessary as artistic provocateurs, but as witnesses to truth and trying to live truthfully. ¨

History offers us a cup, and in order to be a full human, we must empty it. It has a bitter taste. It is the taste of Truth.