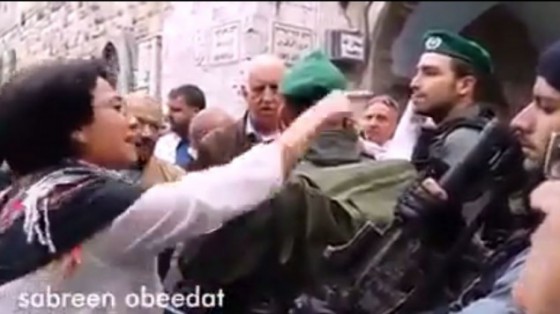 n an amateur video of the confrontation, Zoabi can be seen angrily accosting Border Police officers who were blocking an entrance to the site in the Old City of Jerusalem.

“We know our rights and we know how to fight for them,” Zoabi said as she thrust her finger at the policemen’s faces. “The whole time they say to you that we are terrorists but we want to live, to pray, to go to our land. Is that terror?”

“Would you want someone to do that to your sister?” she challenged the officers, who remained stoic throughout the tirade. “After all, there were those who did that to you dozens of years ago, there were those who ruled over you and slaughtered you. What is the lesson of the Holocaust? Don’t murder and don’t be racist. Six million of you were murdered and for what?”

..
Zoabi, a member of the Arab Balad party, eventually entered the Temple Mount compound after police had dispersed the rioters and reopened the site.

..
In August police recommended that Zoabi be put on trial for incitement, threats and maligning a civil servant over an incident in which she insulted two policemen. According to Ynet, Zoabi called the two Arab Israeli policemen “collaborators with the oppressors of their own people” and said that “they should be used to wipe the floor.”

In June, Zoabi said the kidnappers of three Israeli teens later found killed were “not terrorists.” Following the abduction of Naftali Fraenkel, 16; Gil-ad Shaar, 16; and Eyal Yifrach, 19, on June 12, suspicions quickly pointed toward Hamas operatives as being behind the attack. The kidnappings set in motion a chain of events that led to the summer conflict in the Gaza Strip against Hamas, called Operation Protective Edge.

Zoabi also angered right-wing lawmakers who said articles she published during Protective Edge constituted advice to Hamas on how to defeat Israel.

The incidents prompted the Knesset Ethics Committee to banish Zoabi from Knesset meetings for six months. Zoabi has petitioned the High Court of Justice against the ban after an appeal to the Knesset assembly to nullify the exclusion was voted down.