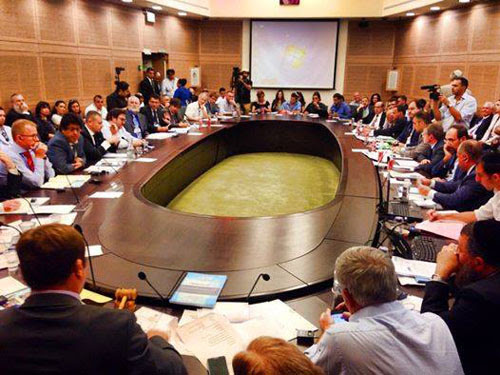 The Danish, Swedish and Dutch ambassadors to Israel, as well as officials from the embassies of Britain, Belgium, Italy, Hungary, Austria and Germany took part on Monday (Jul. 28) in an urgent meeting of the Knesset Immigration, Absorption and Diaspora Affairs Committee on the situation of Jewish communities in Europe.

MK Yisrael Hasson (Kadima), a former deputy director of the Shin Bet internal security service, told the ambassadors: “NATO bombed 5,000 civilians in Kosovo just because it was insulted; 27,000 Iraqi civilians were bombed during the American invasion because they posed a danger to the US; there is not a country in the world that can talk to us about morality.”

MK Hasson told the foreign envoys that “if the European countries fail to protect the Jews within their territory, the State of Israel will. Jewish blood is not cheap blood.” He further warned that “if you do not stand by our side, the day when Islamic terror will reach your homes, your beds and your kindergartens will come soon.”

MK Shimon Ohayon (Yisrael Beitenu) addressed the pro-Palestinian protests across Europe and said Israel is fighting “the war of the free and enlightened world against the darkness of Islam.” According to him, had the world truly been concerned about the violence, “we would have seen protests all over Europe against the terrible acts being committed in Syria, where some 200,000 people have been raped and butchered.”

Representatives of the Jewish communities in Europe, who arrived in Israel with the help of the Israeli Jewish Congress, spoke about their sense of insecurity. “Calls of `death to Jews` and `burn the Jews in gas chambers` are heard regularly on the streets,” one representative said.

Nathan Gelbert, a Jewish resident of Berlin, said the city has seen “severe pro-Palestinian demonstrations” since the IDF launched Operation ‘Protective Edge’ in Gaza. “These protesters don`t know how to say `hello` in German, but they know very well how to shout that Israel is fascist and cruel,” he said.

The European envoys condemned the anti-Semitic attacks in their countries and described the tools their governments use to combat the phenomenon. A representative of the French embassy in Tel Aviv said his country pledges”zero tolerance for displays of anti-Semitism, adding that “every attack on France`s Jews is an attack on all of France.” France, he said, has beefed up security around the Jewish communities even before the recent anti-Israel demonstrations. “France is not denying that there is a problem. The French government`s efforts against acts of racism will gradually increase,” said the official.

Dutch Ambassador to Israel Caspar Veldkamp noted that his country`s attorney general has opened cases against 40-50 people who participated in a radical demonstration and chanted anti-Semitic slogans. “The acts of anti-Semitism call for strong measures; otherwise we will all slide down the slope. Europe should have exported a position of mutual respect rather than import the hate and the Israeli-Palestinian conflict,” he told the meeting.

Danish Ambassador Jesper Vahr said: “As an ally and as a country we will not tolerate anti-Semitism but Denmark, as a country that respects freedom of speech, allows people to express their objection to actions taking place on the ground. My government`s position is that Israel has a right to defend itself.”

Absorption Committee Chairman MK Yoel Razvozov (Yesh Atid) said a distinction must be made between freedom of expression and incitement. The European countries must protect the Jews within their territory,” he said. “Otherwise, terror will eventually reach you.”

MK Razvozov concluded the meeting by saying that the State of Israel is committed to protecting every Jew in the Diaspora. Turning to the foreign officials, he said: “Take into account that if the terror groups lay down their arms, there will be peace; but if Israel lays down its arms, Israel will cease to exist. This is the sad truth.”