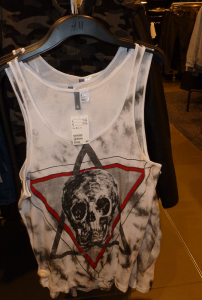 On Monday, blogger Elder of Ziyon postedphotos of the shirts, which feature a Jewish Star of David with a skull in the middle, sent in from a blog reader in Birmingham. Meanwhile, Times of Israel blogger Eylon Aslan-Levy reported seeing a similar design for sale at H&M’s store in London.

Elder of Ziyon said the Birmingham shopper complained to the store manager, who refused to remove the item. EoZ also noted that the shirt was not available for purchase online.

UPDATE: Following complaints from shoppers H&M announced that it would withdraw the T-shirts from its stores. The chain also apologized for any offense caused, the UK’s Jewish Chronicle reported.

“The order has been stopped and the others have been pulled,” said a H&M spokeswoman. “This was because of the feedback we received.”