The Arab Spring began in Tunisia, and it’s lurching toward the brink again just weeks after the Egyptian army overthrew the Muslim Brotherhood government. 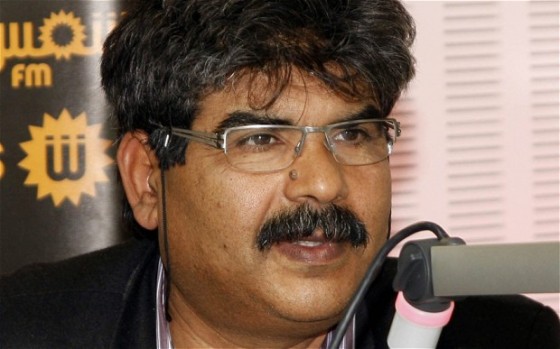 Ennahda, the local branch of the Muslim Brotherhood, is taking the heat. While they aren’t being fingered as directly responsible, they’re being blamed all the same because they dominate the government and they’ve gone easy on the extremists this past year and have sometimes even colluded with them. 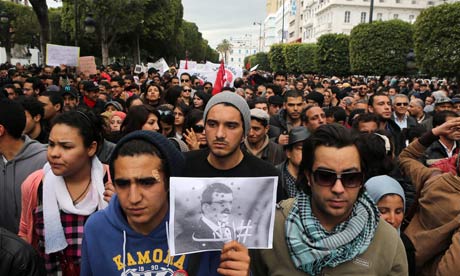 Thousands of furious demonstrators converged on parliament this week, yelling, “the people want the fall of the assassins.” Police officers repelled them with tear gas. Prime Minister Ali Larayedh refuses to step down and is blasting the demonstrators as “anarchists.”

Unlike in Egypt, the Islamists won less than half the vote in the election. Tunisians are stuck with them anyway, though, because secularists split their votes among dozens of parties and the Islamists walked away with a plurality. And though they were forced into a coalition with liberal and secular parties, they still got to choose the prime minister.

Ennahda is described as “moderate” in almost every single article published by wire agency hacks, but the only reason it’s relatively moderate is because it’s forced to share power. Tunisia’s Islamists conceded to building a civil state instead of an Islamic state because they face massive resistance and they don’t have enough seats in the parliament to do anything else. Since the police and the army are loyal to the country and not the party, that’s that. If Ennahda had won a majority and had the strength to muscle everything through, we would be looking at a different Tunisia—an Egypt in the Maghreb.

But Tunisia is much more liberal, secular, prosperous, and politically developed than Egypt. Both countries have problems that look similar on the surface, but the difference between the two is enormous. Tunis looks and feels more like France than like Cairo. The northern part of the country, where most people live, is more culturally similar to Europe than anywhere else in the Arab world outside of Beirut, which is almost half Christian.

In Egypt’s parliamentary election in winter of 2011, the Salafists—the ideological brethren of Osama bin Laden—won a shocking 28 percent of the vote. Meanwhile, the Salafist party is still banned in Tunisia, even with Ennahda in the government. It’s a marginal movement that scares the hell out of just about everyone, not just on ideological grounds, but also because it’s responsible for a spree of violent incidents since the Ben Ali government fell, including setting fire to an American school and threatening to kill all the Jews.

Algerian Salafists killed tens thousands of people during the 1990s. Most Americans haven’t heard word one about that horror show, but Tunisians won’t forget it any time soon. Algeria is next door. The border between the two in the Tunisian Sahara is unmarked and wide open. The Salafist Movement for Preaching and Combat is still active on the Algerian side, and terrorists are trickling into the country.

The Al Qaeda attack near Mount Chambi this week was the most lethal against Tunisian security officials in decades. I drove to the top of that mountain two years ago. It’s the tallest in the country and from the top you can see into Algeria. The entire south side is a national park, and it’s lovely. But today it’s a terrorist nest. You go there, you die.

Ennahda and the Salafists ostensibly hate each other, but they have things in common ideologically, and they have an on-again off-again modus vivendi that’s no longer a secret.

Last year someone leaked a video showing Rached Ghannouchi, Ennahda’s leader, delivering a speech to Salafist youth leaders. He winked and nudged and not-so subtly suggested they were on the same side, and he got busted. “I tell our young Salafists to be patient,” he said. “Why hurry? Take your time to consolidate what you have gained.”

That video set the country on fire. The average Tunisian should have known Ennahda was little more than the “good cop” next to the Salafist “bad cop,” but at least they know it now, and it’s one of the reasons Ennahda’s popularity has cratered.

My Tunisian fixer Ahmed tells me he’s all but certain the labor parties will win the next election and that Ennahda will be out on its ass. He can’t really know that, but it’s certainly plausible. Ennahda might even fall sooner than that if one of the liberal parties resigns from the government or if demonstrations become an unstoppable tide like they did during the revolution a few years ago. The country’s political center of gravity has been moving away from the Islamists since the day they entered the government, and the only hard power leverage they have is the banned Salafist movement, and even that’s just theoretical.

Tunisia is mellow, even pacifist, compared with Algeria. The army is smaller than Egypt’s, and it is not—or at least it has not been—a political player. So I don’t expect a full-blown Algerian-style insurgency or an Egyptian-style military coup. Nor is a Tiananmen Square-style massacre in the cards. Tunisia is not a police state, and Ennahda admits it’s afraid of the army.

But tensions are rising, the situation is volatile, the country is more dangerous now than even a week ago, and the region is always surprising. Keep an eye out because even the “moderate” Islamists empowered by the Arab Spring are back on their heels. They thought they owned the future, but they do not.