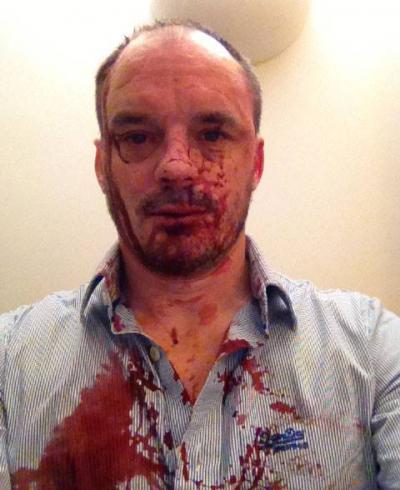 The editor of an online gay and lesbian magazine was attacked last night in South London.

Christopher Bryant, editor of Polari magazine, and his partner Damon were walking home from Bryant’s birthday dinner through South London’s Betts Park when the couple was intercepted by a group of six men, who started speeding up and following the couple down the path.

He told GSN: ‘It all went down so fast.’

When Bryant doubled-back to get the attackers off his partner, they beat him to the ground, kicking his face and saying ‘stay down faggot’.

Bryant said that every time he tried to look up, his attackers would kick him in the face and said ‘don’t try anything’.

The attackers stole Bryant’s wallet and phone before pushing him back to his partner and telling them to stay still for five minutes or they would be killed. The attackers ran off shortly after.

Bryant says the couple was in the hospital emergency room for hours. Bryant’s face is badly cut and bruised, and his partner was kicked in the back and suffered injuries to his hip.

Police are still investigating the attack, and are looking for suspects. After reviewing CCTV, the police were unable to track the suspects leaving the park.

The attack comes just one day after International Day Against Homophobia (IDAHO), a global campaign to raise awareness against gay hate.