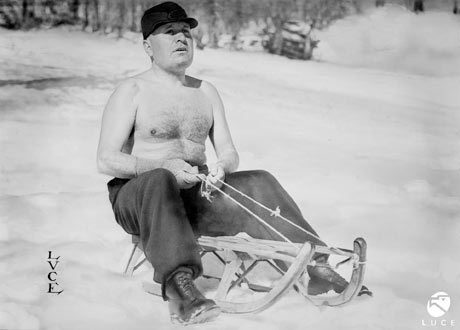 As part of its attempt to digitalise world history and culture, Google has struck a deal with the Italian government to post 30,000 Italian newsreels and documentaries from the 20th century online, many of which glorify Benito Mussolini‘s fascist dictatorship.

Google has dedicated a YouTube channel to the crackly news reports, which represent about a third of the newsreel and documentary archive held by Italy‘s Istituto Luce-Cinecittà.

The core of the archive is short films made by the Istituto Luce, which was founded in 1924 and which became a propaganda tool for Mussolini, regaling cinema audiences with tales of Italian industrial prowess and the oratorical powers of Il Duce.

Also included in the archive today, and available on YouTube, are newsreels shot by Settimana Incom from 1946 to 1964 which document Italy’s economic miracle and paparazzi chasing starlets indulging in Rome’s Dolce Vita.

«Italy’s historic memory is now available to all through the world’s most viewed online video channel,» said Rodrigo Cipriani Foresio, president of the Institute.

One Google official said the deal formed part of the company’s drive to «make the web the mirror of the world,» from its digitalisation of Nelson Mandela’s archive, the Dead Sea Scrolls and 33,000 works of art, to the posting of 130,000 images from the Yad Vashem museum of the Holocaust in Israel.

«We have a culture institute in Paris, we have 15 engineers and we’re spending tens of millions,» said Carlo d’Asaro Biondo, Google’s manager for Europe, Africa and the Middle East.

Posting videos that include Mussolini’s posturing was part of the process, he said. «The Istituto Luce is much more than that, but the films about fascism make us understand and enhance our critical spirit,» he said. «I am not sure if its good to make fun, but they seem quite funny.»

The director of the institute, Edoardo Ceccuti, said his favourite Mussolini newsreel featured the dictator being hailed in Italy as a peacemaker, much to his annoyance, after a congress in Berlin in 1938.

«On his return he was followed from Rome station to Piazza Venezia by a massive crowd calling him a ‘Man of Peace’. They waited five hours before he appeared on his balcony, gave a straight-arm salute and went back in, clearly furious because he did not want to be a man of peace. He said nothing and it was about his most eloquent speech.»