Bruce Bawer’s book The New Quislings. How the International Left Used the Oslo Massacre to Silence Debate About Islam, is interesting for a particular reason: very few American writers have observed Norway from within over a long period. (Bawer has lived in Oslo since 1999). His reflections on 22/7 should be interesting for both Norwegians and and an international opinion.

Norway’s public sphere is still a tribal affair,  and hard to penetrate. A heavy dose of political correctness goes perfectly well with tribalism, and gives it a sense of purpose and self-righteousness. Foreign journalists have a difficult task trying to dechiffer what is going on. They are left to scratch the surface, and may be forgiven for thinking that it is authentic.

That may be one of the reasons why Bruce Bawer has been a non-person in Norway up til now. One reads about foreigners in Japan who are told «you are getting to know us a little too well», and Bruce Bawer may be unwelcome for the same reason. The powers that be don’t like prying eyes. They want affirmation, not criticism.

Is Bawer up to the job? Yes and no. Bawer’s forte is that he is an American, which means he knows and cherishes liberty, freedom. It is ingrained in Americans. Norwegians cherish independence, but freedom as a political concept is a different thing. The independent-minded Norwegian has lost much of his freedom because he did not care enough about political freedom. That is the sad story repeating itself in much of Europa today.

This is a very important distinction. Margaret Thatcher says as much in The Iron Lady, after visiting America: America is about ideas, Europa is about history.

When push comes to shove, Roger Cohen, has more in common with Bruce Bawer than his fellow liberal minded Europeans, even if his writings suggests otherwise. It is a sore point American liberals have a hard time admitting. The new Antisemitism in Europe that follows the rise of islam as a shadow is a painful reminder, and stops many American liberals from losing their direction. In the end. Not so in Europe. In Europe being liberal has a darker meaning, and tolerance for the new Antisemitism is one of them.

This is a truth of the outmost importance, and I wish Bawer would have recognized it, in stead of only lambasting Cohen. Because in the end I think Thomas L. Friedman, Roger Cohen and a host of other liberal minded American – Jews many of them – will be on the right side.

One does not forget so easily. The new Antisemitism in Europe is one of the most frightening specters of the new multicultural Europe. Liberals have a hard time admitting that it is part of parcel of muslim immigration. They are squeezed from two sides: the left has drifted towards a steadily more anti-Israeli position, and the line between Antisemitism and anti-israelism is hard to draw. There is no question that this animus against Israel and Jews are a feature of a secular, dechristened educated elite in Norway. There is very little resistance and protest amongst their peers. Ordinary people on the other hand are mostly indifferent or sympathetic to Israel. So it is a question of rot at the top, not the bottom. Still the elite talks about unhealthy instincts in the deep of the population, and even wants to change the constitution, in case the people get «ideas» some time in the future. The general secretary of the European Council, Thorbjørn Jagland, says as much, and it does not strike him that this is offensive talk.

The whole rhetoric of racism has nazism as backdrop, and instead of cringing, one has no compunction asking:   Who are the fascists?

The left, the multiculturalists and the liberal social democracy under whose umbrella almost everybody belongs, are convinced that Europe are threatened by a new fascism. 22/7 scared them and shook them to the bone. They are in a way victim of their own ideology, their lack of political concepts. They have no other way of understanding this evil deed, other than blaming it on a new right they did not really know about. They had never read or heard of Bruce Bawer before. Suddenly all the commentariat knew the name of this rightwing ideologue.

Which is totally ballocks as everyone who has read Bawer’s two other books knows.

Bawer then had a chip on his shoulder. How would he address «the situation»?

He has chosen a frontal attack by calling his book The New Quislings. It is the most offensive title one could imagine. Bawer says it was deliberate. He knew it would provoke. But he means what the title says: he thinks that the political-cultural elite are the heirs of Quisling, both ideologically and socially.

That is a long shot.

There is a lot to be said about the Labour party, both before, during and after the war. Before the war Labour had a policy of «the broken gun», that, when in power, left the country defenseless on 9. of April. But after the war Labour managed to fall down on the right side of history; joining NATO and resisting communism, which was quite strong right after the war. Labour joined the CIA in combatting communist infiltration of the press, labour unions, political youth movements and society in general. Under the leadership of party secretary Haakon Lie the party was a staunch defender of Israel.

But with the rise of the 68-generation this stance was discredited, and this rewriting of history has not abated, it has gained ascendandcy.

Bear in mind: after the fall of the Berlin Wall and the Soviet bloc, there was appointed a commission that concluded that surveillance of communists and the new left, maoist or reformist, was illegal. The police trespassed and encroached upon the right to political dissent by registering political views. That Norway had a marxist-leninist party who openly advocated overthrow of the political system by force if necessary – selfdefense in ML-jargon – did not matter. Thus totalitarian ideology was rendered harmless and accepted as normal. This formed a template for the future: with the rise of islam in Norway, it was met with the same overbearing tolerance and refusal to consider if there might be a clash of values.

This normalization of totalitarianism also had a security aspect: since it was forbidden to register opinions, the same applied to religious conviction. This tolerance was taken to extremes: it was not forbidden to be a member of Al Qaeda in Norway. Even preparations for terror had to be in concert with at least two persons, in order to be illegal.

During the radical years – the legitimacy of the state, of the democratic system, was questioned. It is simply not true that the marxist-leninists only talked. Their movement was a whole package: ideology, a strategy for seizing power, both through mobilization and armed resistance. The all out character of the fight meant that it was correct to be prepared for all circumstances. Everything was possible: down to theft and burial of dynamite. Just in case. The maoist party also had its own security wing that spied on political adversaries, not just on the right side, and the police. The softly socialist party, SV, on the other hand spied on the security police, and compiled lists with names of their officers and cars.

For people on the left this was considered perfectly normal resistance against the class enemy. That this was subversion, that it questioned the legitimacy not only of the state, but democracy itself, was beyond most members, and still are. The past has been quietly buried, many members have made careers in the media, and cultural life.

These skeletons are still in the cupboard, and the result is that Norway in some sense reminds one of a film by Chabrol, Truffaut or Bunuel: The discreet charm of the bourgeoisie. This generation of 68’ers have raised kids that have taken their parents version for granted. No revolt against the revolters. The parents insist on being both antiauthoritarian and authorities. Which makes for schizophrenia.

Bruce Bawer happened to be drawn into this maelstrom. He suddenly was in the limelight, and fights back. He has a Norwegian friend, and a two year old nephew in Telemark. The book is written to safeguard his future, Bawer tells us. He cares about Norway.

But media does not care about Bawer. He was branded a «unfriend of Norway» over two pages in  Norway’s biggest daily, VG, by Anders Giæver. Giæver did not understand Bawer’s book at all, and declared him an enemy.

It all comes down to sticking «Quisling» to todays political and media elite. They won’t take it. And never will.

Both the title and the reasoning are tactical mistakes and simply wrong: Bawer wants to posit a betrayal, that today’s elite are the heirs to Quisling. But that is simply wrong. If anything they are the heirs to the dark side of the Enlightenment: Marx, Lenin and Rousseau, a mix of naivety , piety, socialism, lutheranism, hedonism, secularity in its negative, anti religious sense. Official Norway are about losing oneself, and God knows what creeps in. Satanism and black metal are a curious and disturbing phenomenon in the New Norway, and has gained official acceptance, even though church burnings and murder lies in its wake.  Shortly before 22/7 a wonderful baroque church in Porsgrunn, The Church of Jesus Christ, was burned to the ground by two youngsters.

There are no questioning even by leading church members what is going on in people’s heads.

It is a pity that Bawer introduces Quisling as a key figure who can explain the puzzle. If anything Quisling reminds us of Anders Behring Breivik. Not Jens Stoltenberg. One thing is the moral offense, another is that it is factually wrong.

Quisling was patological, and Breivik is clearly mad.

But the comparison does not come out of nowhere. The liberal left that controls the media are convinced that Anders Behring Breivik’s crime was political first and foremost. They bracket its pathological side and end up blaming, libeling what they characterize as dangerous milieus and opinions, not fully understanding that they are in the process of criminalizing a huge segment of the opinion.

This movement and ideologizing of 22/7 risks eliciting exactly the response that Bruce Bawer brings both in his book. That it is not a few dissenters who are the new fascists, but the ruling elite. Both are wrong.

But Bawer has an important point: the media and commentators showed no restraint after 22/7, but started what is correctly called a witch hunt.

No wonder Bawer was provoked. But he spends too much time elaborating on personal attacks. It is true: people like Sindre Bangstad, Thomas Hylland Eriksen, Jostein Gaarder, Aslak Sira Myhre, Lars Guleet al  showed no restraint. They openly called for dissenters to be muzzled.

There is a fight going on about the soul of Norway: in a morbid sense Anders Behring Breivik is a lost child of the 68-generation, and they do not recognize him, and wants to stamp out any connection, relevance or relationship. But in a sense this generation is chasing its own tail. They are obsessed by samess – they can only recognize what looks like and thinks like themselves. And this shadow, this horrid monster scares them stiff. They want to quash his ideas, they think it is his ideas that are dangerous, and that they can reeducate the public by denouncing anybody who harbors ideas similar to his. But this simplistic notion of  the relationship between word and deed are in many ways too similar to their own violent past; with its embrace of violent liberation,  especially abroad, but also at home.

Norway is on the wrong track.

That the media and commentariat are insisting that Breivik is normal, is a worrying development. 22/7 is about to evolve into something we cannot foresee. A runaway train. 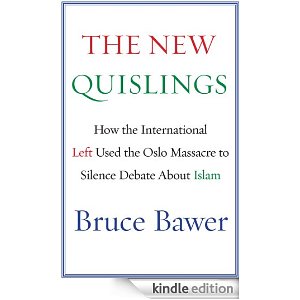