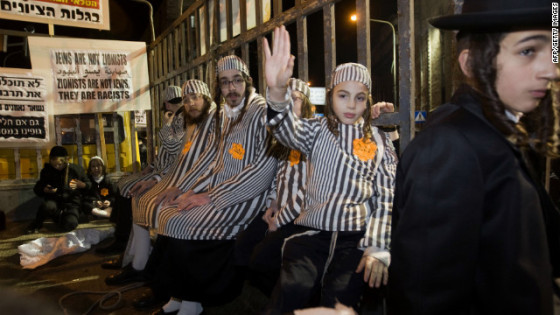 The chairman of Yad Vashem, Jerusalem’s Holocaust museum and memorial, criticized protesters for making what he said was a “false comparison between the reality today to the Holocaust.»

“There is no place for this behavior, which hurts Holocaust survivors and causes the cheapening of the memory of the Holocaust,” Yad Vashem’s Avner Shalev said in a statement Sunday.

“We are speaking about a handful of extremists. … It is important that the memory of the Holocaust will be a uniting factor in Israeli society and not the opposite.”

“Cynically using the characteristics of what was the attempt to exterminate our nation is one thing we simply cannot accept,” said Cabinet member and Holocaust survivor Yossi Peled. “I am willing to take part in every argument within the Israeli society, but some things are taboo.”

Peled told CNN, “Dressing up children with the yellow ribbons with their hands up in the air, re-enacting pictures of children from the ghetto, is simply inconceivable. Six million Jews, including 1 1/2 million children, cannot be used as a tool in a public debate.”

One irate member of the Israeli parliament, the Knesset, called on Israel’s attorney general to look into pressing charges against those responsible for the Holocaust garb.

“My grandfather and father were in ghettos, and there is no connection between what happened in the Holocaust to the Jewish people and the status of the Haredi in Israel,” Knesset member Marina Solodkin told the Israeli newspaper Maariv, using the Hebrew term for ultra-Orthodox.

“Anyone who used the symbols of the Holocaust last night for the sake of a demonstration trampled the dignity of the hundreds of thousands of survivors who still live in our midst and the memory of those who perished in the Holocaust.”

Jewish leaders blast ultra-Orthodox use of Holocaust symbols in demonstration