Helgelektyre: The West has had it

The West Has Had It — Say the French

In trying to come to terms with the complexities of our day, the mainstream media is of little help to us. Newspaper reports are for the most part editorials in disguise, shilling for a chiefly leftist agenda. As for the TV networks—News, public affairs programming and the majority of talk shows—they are almost always slanted and superficial. The Canadian Broadcasting Corporation in Canada, for example, is little more than a farm team for Al-Jazeera, the BBC is a marble soapbox, and the American colossi are in the business of generating simulated worlds.

For those who have the time, however, nothing can replace a significant body of literature that has come both to supplement and to ground our awareness of the intellectual currents and ideological forces troubling the contemporary world. In this respect, the book still remains the primary “technology” for the dissemination of substantive knowledge. Our focus here tends to fasten, for obvious reasons, on the English and American publishing market, rich with important contributions toward our understanding of the times we live in, but by no means exhaustive. Those who enjoy the leisure to travel further afield might do well to consult the school of Nouveaux Philosophes, or New Philosophers, enlivening the intellectual scene in France, whom National Post columnist Robert Fulford describes [1] as “more academic yet more flamboyant cousins of the American neo-conservatives.” Many of their books have been translated and are readily available.

This distinguished cohort boasts some of the most astute writers and commentators on the predicament in which the West now finds itself. Among the most prominent members are André Glucksmann, generally regarded as the father-doyen of the group, Alain Finkielkraut, Shmuel Trigano, Bernard-Henri Lévy and Pascal Bruckner. Although their sources, methods, specific subjects and lines of attack may differ, they are all united in confronting what they intuit as the imminent collapse of the West.

Glucksmann is concerned with what he calls “the Somalization of the planet” and the Western tendency “to sleep peacefully” before the looming threat of a reinvigorated Islam, which “puts us all in jeopardy” (City Journal [2]). Finkielkraut sees the swelling tide of antisemitism as a sure sign of a coming civilizational catastrophe. His seminal texts, The Imaginary Jew [3] and The Defeat of the Mind [4], make essential reading. In Left in Dark Times [5], Lévy (who coined the term by which the group is known) retains a nostalgic allegiance to the “old left’s” commitment to “social justice” but excoriates the simple-mindedness, facile utopianism, self-infatuation and futile search for transcendence which characterizes the “new left.” (Though how this differs from the “old left” is an open question.) We might say that the terms “social justice,” “diversity,” “accommodation” and “egalitarianism” bandied about by the left comprise an averting rhetoric meant to protect an obsolete and defective world-view, like installing a car alarm in a Trabant.

Trigano takes a somewhat different tack, analyzing the Jewish proclivity to self-betrayal as a way of dodging “la mauvaise foi planétaire”—“the planetary bad faith” represented by antisemitism (Controverse, numero 10 [6]). As he writes in his le temps de l’exil [7], “Une lumière s’étaint dans le monde” (“A light is extinguished in the world”). Curiously and somewhat incomprehensibly, as if in confirmation of Trigano’s thesis, both Finkielkraut and Lévy have recently joined the new petitionary group JCall [8] with a distinctly anti-Israeli stamp, and have been taken to task by Trigano. “There is something pathetic,” he says [9], “about seeing political blindness masquerading as moral grandiloquence…Israel has become the screen onto which Europe projects all its problems and its failure to face up to the challenges at hand.”

Nevertheless, in spite of their pessimism and their differences, these writers continue to struggle against that which they fear may well be inevitable. This is particularly true of Bruckner who, in my estimation, is one of the most compelling and prescient of the cadre of French intellectuals and repays prolonged study. Indeed, in his 2006 La tyrannie de la pénitence [10], he predicted the Russian invasion of Georgia and the craven European prostration before the Russian juggernaut: “Si demain Vladimir Poutine…envahissait la Géorgie…l’Europe occidentale, d’un seul souffle, s’exclamerait: servez vous!” (“If tomorrow Vladimir Putin…should invade Georgia…Western Europe, with one breath, would exclaim: help yourself!”) Two years later it came to pass precisely as he had envisioned. And in earlier books such as The Tears of the White Man [11] and The Temptation of Innocence [12], Bruckner addresses the pervasive cultural drift toward self-abasement, political weakness and the glorification of the Third World, especially Islam, at the expense of our own survival. “The future of the West,” he laments, “is self-destruction.”

True, in La tyrannie de la pénitence, the most recent of his political books (his 2009 offering, Le Paradoxe amoureux, deals with the sexual paradoxes of the current age), Bruckner seems to go against his own grain, downplaying the apocalyptic mode of thought. “Il existe chez les Modernes,” he writes, “une fascination pour le thème du déclin…qui seduit à la fois les experts et les moralistes…Quiconque en caresse l’idée se voit comme l’intelligence supérieure qui a saisi le processus caché de l’Histoire. Annoncer…la décadence d’un empire vous pose en prophète.” (“There exists among the Moderns a fascination for the theme of decline…which seduces at the same time both the experts and the moralists…Whoever caresses the idea sees himself as a superior intelligence who has grasped the hidden processes of History. Announcing… the decay of an empire makes you seem like a prophet.”)

One can understand Bruckner’s reluctance to endorse the apocalyptic sensibility. He is right to regard with a skeptical eye the ever-renewed temptation to play Cassandra and is largely, if not entirely, correct in his diagnosis of the psychology involved in its utterance. And yet the sense of foreboding, the dread of civilizational foreclosure that is preparing, continues to haunt Bruckner so insistently that his anti-apocalypticism seems more like a confirmation than a denial. The gentleman doth protest too much, methinks. One emerges from a reading of Bruckner with the potent sense that the rhetoric of disaster is not a mere falling back on the ancient tradition of the world running down, of “the latter time of all seeds is less in power,” as a standard trope of classical literature has it.

Quite the contrary. We have succumbed once again, as our forefathers did in the 1930s, to the habit of disregard and the naïve belief in harmonious resolutions. Before it is too late, we must now, says Bruckner, leave behind the “cocon rassurant de la coutume,” (“the reassuring cocoon of custom”). “Si nous ne comprenons pas, c’est que nous sommes sourds et aveugles!” (“If we do not understand, it’s because we’re deaf and blind!”). According to Bruckner, the Western mind is infected by bad conscience for its history of colonialism, which neutralizes any concerted effort to resist the inundation and retribution that is coming. Make no mistake about this, he warns, the Islamic invasion is underway, while the West, “avec une inconscience suicidaire…s’agenouille devant les fous de Dieu…” (“with a suicidal thoughtlessness…kneels down before the madmen of God…”).

On the whole, Bruckner and his compatriots get it right. They see much more clearly than the punditocracy, the editors and anchormen, and the liberal-left intelligentsia who muddy our thinking with their analgesic prescriptions for the sense of unease that many of us feel. Of course, this somber theme has been explored by non-Gallic writers as well—one thinks, for example, of James Burnham’s Suicide of the West [13], Robert Bork’s Slouching Towards Gomorrah [14], Walter Laqueur’s The Last Days of Europe [15], and most recently Jamie Glazov’s United in Hate [16], Bruce Bawer’s Surrender [17], Christopher Caldwell’s Reflections on the Revolution in Europe [18], Theodore Dalrymple’s The New Vichy Syndrome [19], Melanie Phillips’ The World Turned Upside Down [20] and Thomas Sowell’s Dismantling America [21], among others. But the French confrerie is of a piece, so to speak, identified as a school of thought and presenting a unified front against the menace of multicultural dissolution. It is like listening to an orchestra rather than to individual instruments. This is why the Nouveaux Philosophes should be read and pondered.

In our historical juncture, they urge us, with the Middle East erupting, with international terrorist movements seeking to wreak planetary havoc by any and every means at their disposal, with a plainly deranged, unstable and theocratic regime in Iran careening towards the acquisition of nuclear technology and sophisticated delivery systems like the Shahab 3D, Shahab 4, Kavoshgar and Sajjil-2 ballistic missiles that can reach any country in Europe including Britain, with vast numbers of Third World poor streaming to the West and gradually altering the demographic equation, with the growing strength of Islam not only in Europe, where it is decisively out-reproducing the host populations, but in America as well, and with Jews being set up as scapegoats everywhere—in the newsrooms, the universities, the labor unions, the professions, the Churches, the United Nations, the political elites, the court of public opinion—we need to respond with understanding, moral fortitude and the willingness to resist no matter what the cost. Otherwise, as much as the realization may make us squirm, it really will be Apocalypse Soon.

The message of the New Philosophers may be tersely summarized. Read the newspapers skeptically. Throw darts at the talking heads. Distrust our appeasing politicos. Know that the contemporary left, if it is not aggressively countered, will open the gates to the barbarians and bring ruin upon us all. We must no longer heed the voices that would sedate us into a false sense of security or absolve us of the sin of being who we are by acceding to the demands of our adversaries. We should also keep in mind that the Islamic antagonist is very explicit in bringing his millennial expectations to pass, with surahs like Koran 42:17,18 as warrant: “The Hour of Doom may be fast approaching…Indeed, those who doubt the Hour are in grossest error.”

There is, to be sure, a certain continuity at work in French thought regarding the emergence of radical Islam and the Western failure to deal with it. As far back as 1956, acclaimed author and government official André Malraux [22] had his finger on the pulse of the future. Malraux warned [23] that the great problem of our time was the rise of Islam, that the Western world seemed unprepared to oppose it, and that Muslims preferred “the future of their race to the benefits we intend to bring them.” The New Philosophers have taken up and expanded his message, arguing that this is no time for ethically insipid musings, but for outrage, energy, insight and courage. For we are now embroiled in one of the great crises of our civilizational existence. 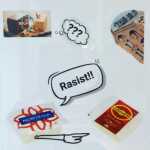