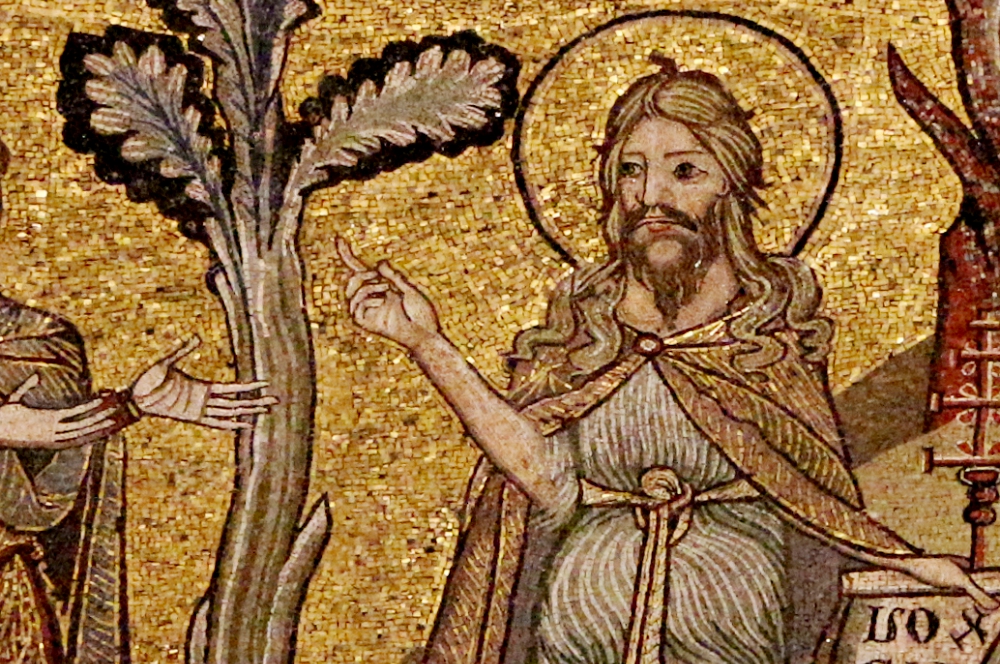 Now some of the Jews thought that the destruction of Herod’s army came from God, and was a very just punishment for what he did against John called the baptist. For Herod had him killed, although he was a good man and had urged the Jews to exert themselves to virtue, both as to justice toward one another and reverence towards God, and having done so join together in washing. For immersion in water, it was clear to him, could not be used for the forgiveness of sins, but as a sanctification of the body, and only if the soul was already thoroughly purified by right actions. And when others massed about him, for they were very greatly moved by his words, Herod, who feared that such strong influence over the people might carry to a revolt — for they seemed ready to do any thing he should advise — believed it much better to move now than later have it raise a rebellion and engage him in actions he would regret. And so John, out of Herod’s suspiciousness, was sent in chains to Machaerus, the fort previously mentioned, and there put to death; but it was the opinion of the Jews that out of retribution for John God willed the destruction of the army so as to afflict Herod.

About this time Aretas, the king of Petra, and Herod the Tetrarch had a quarrel on account of the following. Herod the tetrarch had married the daughter of Aretas and had lived with her a great while; but once when he was on his way to Rome he lodged with his half-brother, also named Herod but who had a different mother, the high priest Simon’s daughter. There he fell in love with Herodias, this latter Herod’s wife, who was the daughter of their brother Aristobulus and the sister of Agrippa the Great. This man ventured to talk to her about a marriage between them; she accepted, and an agreement was made for her to come to him as soon as he should return from Rome, one condition of this marriage being that he should divorce Aretas’s daughter. So when he had made this agreement, he sailed to Rome; but when he had finished there and returned again, his wife, having discovered the agreement he had made with Herodias, and before he knew that she knew of the plan, asked him to send her to Machaerus, a place on the border between the territories of Aretas and Herod, without informing him of any of her intentions. Accordingly Herod sent her there, thinking his wife had not perceived anything. But she had sent messages a good while before to Machaerus, which had been under the control of her father, and so all things necessary for her escape were made ready for her by the general of Aretas’s army. By that means she soon came into Arabia, under the conduct of the several generals, who carried her from one to another successively; and soon she came to her father and told him of Herod’s intentions. Aretas made this the start of his enmity toward Herod. He also had a quarrel with him about their boundaries in the area of Gabalis. So they raised armies on both sides and prepared for war, sending their generals to fight instead of themselves. And when they had joined battle, all Herod’s army was destroyed by the treachery of some fugitives who, though they were of the tetrarchy of Philip and joined the army, betrayed him. So Herod wrote about these affairs to Emperor Tiberius, who was very angry at the attempt made by Aretas and wrote to Vitellius to make war upon him and either to take him alive, and bring him in chains, or to kill him, and send him his head. This was the command that Tiberius gave to the governor of Syria.