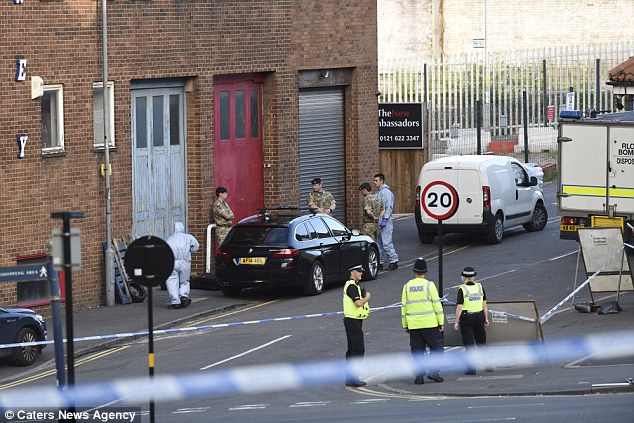 Two of the men, aged 32 and 37, were arrested in the Stoke area of Staffordshire while another two, aged 18 and 24, were arrested at their home addresses in Birmingham.

Another man, 28, was arrested at a different location in Birmingham.

Staff and guests at the Pentahotel, which is on the edge of a police cordon, were advised to stay inside as a precautionary measure.

Veshh Kumar, a concierge at the hotel, said: ‘We had seen police activity since about 12.00pm then all of a sudden at about 4pm the bomb squad and the army arrived.

One resident, who lives in nearby Bishopgate Street, added: ‘Bath Row is cordoned off at the moment.

‘There are about seven police vans and i would estimate over 35 police officers.

‘I have never seen a police operation like this in my life.

But a security source told The Times that the raid was on a bomb-making factory and a significant step forward in a long-running investigation involving M15 and the West Midlands counterterrorism unit.

He told the paper that police and the bomb squad were searching one property that police suspected was being used to make home-made bombs.

In April this year police arrested five people in connection with terror offences in Birmingham and at Gatwick airport which were reportedly linked to attacks on Brussels and Paris.

The most recent bomb plot in the UK was led by Mohammed Rehman and Sana Ahmed-Khan, a husband and wife from Reading, who were planning an attack in central London in June last year.

Rehman had pledged allegiance to Islamic State and had manufactured 11kg of urea nitrate using a hotplate in his bedroom. The couple were sentenced to life in prison in December.