Four years ago, Thilo Sarrazin, a renowned German central banker, who was also a long-time member of the center-left Social Democratic Party (SPD), shocked the German establishment when he published a book in which he argued that Islamic immigration is undermining German society. In the book, Deutschland schafft sich ab [Germany Abolishes Itself], Sarrazin wrote that Islamic immigrants threaten Germany’s freedom and prosperity because they are unwilling to integrate and rely overwhelmingly on welfare benefits.

Although Sarrazin’s party, as well as the governing Christian-Democrats of Chancellor Angela Merkel, distanced themselves from the author — and Islamic organizations tried to take him to court on charges of racial incitement — the book hit a nerve with the German public. It sold over two million copies and became one of the most widely read books ever published in Germany. 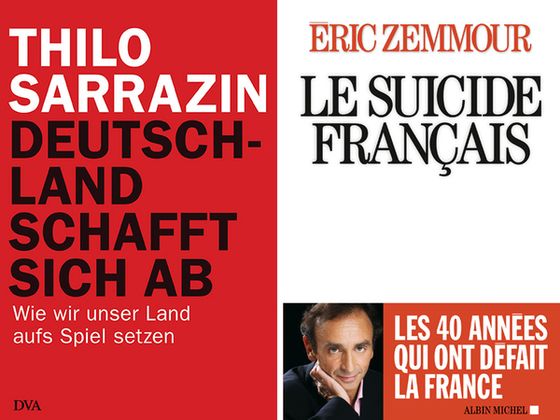 Last October, Éric Zemmour, a French journalist, also published a book, which can be considered the French equivalent of Sarrazin’s book. In Le Suicide français [The French Suicide], Zemmour argues that the policies of the French political elite are destroying the country. His arguments resemble Sarrazin’s and the book has had the same impact. Its sales are breaking all the records. So far, in less than two months, over half a million copies have been sold, in spite of the fact that French Prime Minister Manuel Valls has declared that the book «does not deserve to be read.»

Éric Zemmour, a 56-year old journalist at the conservative newspaper, Le Figaro, was born in France of Algerian Jewish parents who fled their native country in the 1950s during the Algerian War of Independence. Zemmour argues that France is being destroyed by immigrants who refuse to assimilate; by political correctness that stifles freedom of speech and by supranational organizations, such as the European Union (EU), which are undermining the French nation state and the French economy.

Despite its popular success, Zemmour’s book is hardly leading to a serious intellectual debate. His critics have coined the term «zemmourisation of the mind» to describe the venting of ideas that are so preposterous that they do not deserve to be discussed. Others mock his ideas by calling his book «The Smurf Suicide» and referring to the author as «Gargazemmour» – a reference to Gargamel, the evil wizard in the fictional world of the Smurfs. Or they attack him as a racist. According to Senator Esther Benbassa, a Jewish politician for the Green Party, Zemmour is an anti-Semitic «Frankenstein of bad faith.»

Zemmour has made it easy for his critics by devoting seven of the 540 pages of his book to the regime of the collaborator Philippe Pétain during the Second World War. In these pages, he claims the Pétain regime was able to save a number of Jews from the German gas chambers. Even though his view on Pétain is not the essence of the book, these seven pages have attracted the most attention from Zemmour’s critics.

The book is also typically French in its criticism of both the United States, which is blamed for having imported politically correct thinking to France, and of free market liberalism. One of Zemmour’s arguments against the EU is that it imposes «German economic thinking» on France. There is also a longing for the days of French imperial conquest, most notably the Napoleonic era. Bonaparte is apparently one of Zemmour’s national heroes.

One of the few French journalists who openly defends Zemmour is Élisabeth Lévy, who, like Zemmour, is of Jewish Algerian descent. She criticizes Zemmour’s «bonapartism,» but has also called the behavior of Prime Minister Valls — and others who attack the book without having read it — «Stalinist and Orwellian.» According to Élisabeth Lévy, ordinary French citizens long for the past – not, however, to the days of Napoleon, but rather the days when French suburbs had not become strongholds of radical Islam; when French society was still based on French values, and when people who felt insecure were taken seriously by politicians.

The enormous commercial success of Zemmour’s book illustrates the deep dissatisfaction of many average French citizens with their political and cultural elite. Four years ago, Thilo Sarrazin’s book showed that many ordinary Germans do not want the German political elite to abolish Germany. Today, Éric Zemmour’s book illustrates that many ordinary French are not prepared to commit national suicide.

Has Germany abolished itself? Not yet. Has France committed suicide? Not yet. What the books do indicate, however, is that Europe seems ripe for political upheavals.