They also seriously wounded the photographer who took the “red dress” photo, which was probably not a coincidence. 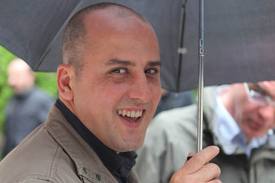 Nor was it likely a coincidence that they fired a tear-gas canister “at close range” at the head of journalist Ahmet Şık, best known for writing about the infiltration and corruption of Turkey’s police forces by the followers of the Turkish Imam Fethullah Gülen. For this, Şık was jailed as a “coup-plotter.” This time, he wound up in the hospital, though he is expected to recover.

Riot police blocked the roads leading to Taksim, the city’s central square, as well as those leading to Istanbul’s famous Istiklal Avenue. They fired gas bombs at everything that moved, including the city’s bewildered stray dogs. Helicopters circled the skies. Wi-Fi in the city center was jammed. The hospitals quickly filled with the injured. So far, reports of deaths have been hard to confirm, with some exceptions. 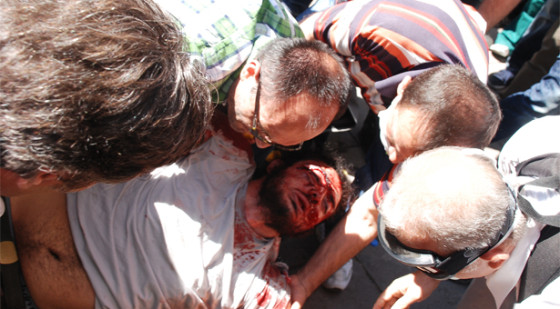 Human-rights activist Ethem Sarısülük is now brain dead, having “come under fire” from police—what kind of fire, we don’t know. 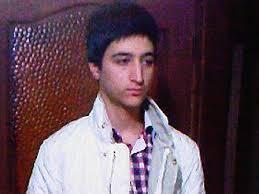 Mehmet Ayvalitas, reportedly a member of a banned group of left-wing hackers, is also dead. Human Rights Watch believes the casualty numbers are much higher than those claimed by the government. Reports of two other deaths, in particular, sound credible, but it’s impossible to be sure. I saw a video of a police vehicle crushing a woman under its wheels; I would be surprised if she survived.

I obtained casualty reports from the hospitals in my neighborhood, which is close to Taksim Square. From one: “A 22-year-old male has lost his left eye due to a plastic bullet. A 19-year-old male is being watched closely with a subdural hematoma diagnosis resulting from the impact of a gas capsule. A 22-year-old male patient has taken a frontal hit in the head and suffered a fractured skull and is under close watch due to acute hematoma diagnosis.” From another: “Over 100 injured patients were treated. Of these, nine suffer from significant trauma, five were admitted for surgery. Of these, one suffered trauma in the testicle, one subdural hematoma (brain), and two trauma of the left eye. One was operated on and has lost all eyesight. The other eye patient is being watched with the diagnosis of eye perforation. Of those planned to be operated on, two suffer from maxillofacial trauma, one with a broken left arm and another with multiple fracture of the collarbone.” From yet another: “Received hundreds of applications during the first two days due to central location. Majority were respiratory cases, eye irritation due to exposure to gas. Of the three patients with head injury, a 34-year-old female received emergency surgery due to brain hemorrhage and compression fracture. The same patient was also operated on the next day due to subdural hematoma. She is under surveillance in life threatening condition.”

It is confirmed that rubber bullets have knocked out the eyes of at least six people. Gas has covered the city like a volcanic cloud. Everyone, even those who stayed indoors, has been weeping and coughing. Adding insult to injury—and injury to injury—the cops fired gas into the accident and emergency ward of two hospitals close to Taksim Square. The police now seem to have moved from pepper spray to a more noxious lachrymatory agent—probably CS gas—causing panic among the public, which believes itself to be under attack by some terrifying species of chemical weapon. 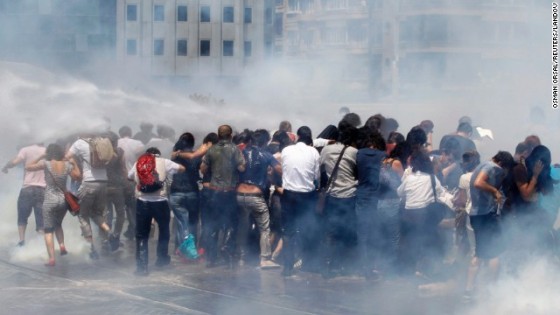 The news from Ankara and Izmir has been particularly disgusting. Police threw gas bombs at the capital’s famous Swan Park, injuring (yes) the swans. Last night a friend, an MP from the main opposition party and a tireless campaigner for Internet freedom in Turkey, told me that his daughter, a junior in law school, had been wounded. She had sent him an SMS: “Police gassed the infirmary.” He asked if I would let the American media know. Police in Izmir called female protestors “sluts” and assaulted them; people there were begging to be let into buildings to escape. A journalist whom I trust, based in Izmir, wrote: “I’m telling you. No one threw one single stone this evening where I am. They are still gassing peaceful people.”

Almost as chillingly, the muzzled and gutless Turkish media downplayed the events. The main source of news here was Twitter. Precisely as BBC World was showing shocking scenes of the protests, Turkey’s TV24 was featuring a lecture from Erdoğan about the dangers of smoking. While Taksim burned, NTV aired a cooking show, and another channel featured an incisive documentary about liposuction.