France just smashed al Qaeda in Mali with little more than moral support from the United States. Washington didn’t even lead from behind. Americans did not lead at all. This time we sat on the sidelines while France—France!—led and did everything from the front.

Last winter the entire northern part of the northwest African country was seized by Ansar al-Dine and al Qaeda in the Islamic Maghreb, who together transformed it into a Taliban-style terrorist state. The famous ancient trading city of Timbuktu—long a mecca for adventurous tourists and the host of an annual international music festival—became a grotesque, hand-chopping tyranny that hemorrhaged violence and refugees.

The international community dithered for almost a year, as if an al Qaeda state isn’t all that big a deal. But when the Islamists began expanding south toward the capital and took the city of Gao, France dispatched its war planes and ground troops and threw the bad guys out in a matter of weeks. Its fighter jets are currently pounding terrorist camps deep in the Sahara near the Algerian border.

President François Hollande visited Timbuktu over the weekend and was hailed as a liberator by throngs of residents, including imams, yelling «Vive la France!»

Of course, Americans didn’t actually surrender to anyone. We were hardly even involved in Mali. And it’s not, as some love to think, because the world has become post-American. The U.S. remains the only country on earth that can project massive amounts of power for an extended period of time anywhere on the planet. The superpower is simply taking a breather. The fact that most of us, Democrat and Republican alike, feel like taking a break from it all doesn’t mean we’re flat on our collective back like Russia when the Soviet Union imploded. 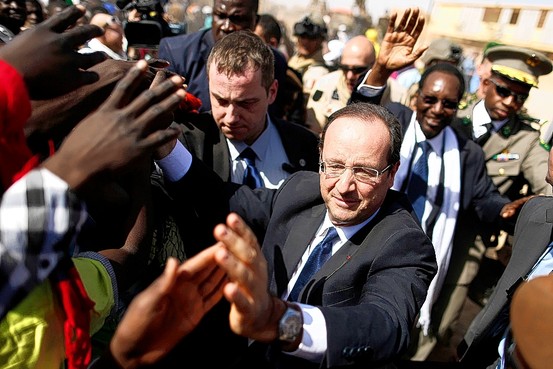 The hypercautious Obama administration is temporary, as is the current war-weary American mood. We’ll be back.

No one bothers with the idea that history is over these days, least of all the conflict with Islamists. Osama bin Laden is dead, but al Qaeda is wreaking havoc all over the Middle East and North Africa. It’s only a matter of time before they mess with us again in a way that we can’t blow off, especially if they’ve convinced themselves that our little break means we’re not as powerful as we used to be. They underestimated us before, and they’re bound to do it again, especially after we withdraw from Afghanistan.

The American superpower is an original. It’s reluctant and self-doubting. Most Americans just aren’t that into it. Policing the world is deadly, expensive, exhausting and thankless. France can unilaterally invade a former colony like Mali and endure nary a peep, but anti-American protests break out all over the place whenever the U.S. intervenes anywhere, even with authorization from the U.N. Security Council.

Strutting around the world like a colossus doesn’t appeal to anything in the American soul. We do it because somebody has to, because we can, and because most of us sense instinctively that we’ll wake up in a different world if Russia and China take over the job.

France stepped up in Mali for a similar reason. Because somebody had to, because Americans didn’t feel like it, and because the French could.

Washington was relieved. Americans don’t worry about waking up in a different and darker world if France calls a few shots internationally. The French share American values, more or less—unlike the Chinese and Russians. So thank goodness France was there to relieve us.

Otherwise Al Qaedastan would have sat there and festered. North Africa’s bin Ladenists have been on the rise, not just in Mali, but also in Libya and Algeria. They’ve been forging ties with the like-minded Boko Haram in Nigeria. Before the French brought down the hammer, the size of their territory in Mali was growing as fast as the body count. The problem hasn’t been solved, that’s for sure. But at least it has been checked for the first time in a year.

Let’s not kid ourselves. Al Qaeda in Africa will be a deadly, serious problem for years. Like any guerilla war, the threat is one to be managed for the time being, rather than solved.

And let’s be straight about something else, too. The French intervention in Mali is not the beginning of a new era. Europe is not the new superpower, nor is the U.S. the new Europe. Europeans can’t project anywhere near as much power abroad, nor do they want to. American power hasn’t evaporated. Americans just don’t feel like using it at this particular second.

We’ll surely assume an interventionist role again in the future. Because somebody has to, because we can, and because eventually something will force us to, whether we like it or not. To paraphrase Leon Trotsky, «you may not be interested in war, but war is interested in you.»

Mr. Totten is a contributing editor at World Affairs and City Journal. His third book, «Where the West Ends,» was published last year.

The Superpower Takes a Breather
American power hasn’t evaporated. Americans just don’t feel like using it at this particular second.