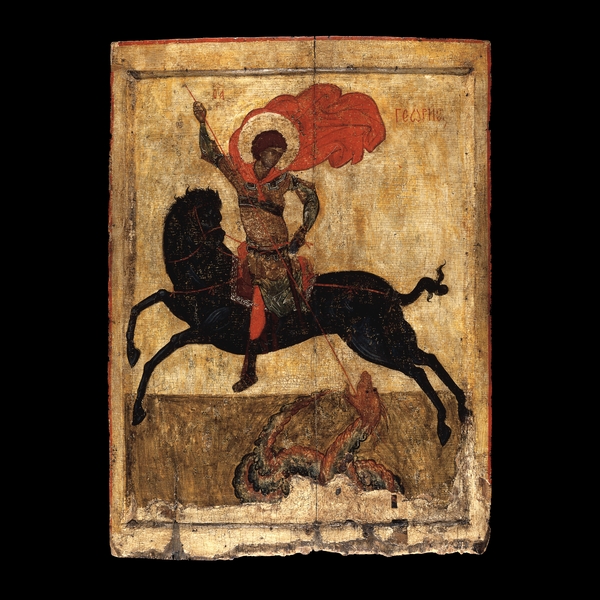 An early masterpiece of Russian painting

This extraordinary icon was discovered in 1959 in the tiny village of Pskov, which lies on the River Pinega, a tributary of the Severnaya Dvina which flows into the White Sea at Archangel, in north-western Russia. The panel was being used as the shutter of a barn window. Subsequent cleaning by conservators revealed that it had been overpainted several times. Below an eighteenth-century folk painting they uncovered a seventeenth-century layer and finally this outstanding fourteenth-century icon, which was immediately recognized as an early masterpiece of Russian painting.

The icon left Russia during a brief thaw in the Cold War in 1973, when a dissident author was allowed by the authorities to leave the Soviet Union. His wife was the person who originally found the ‘Black St. George’ and she was given permission to take her possessions with her to London. The British Museum acquired the painting from her.

The saint is painted in vigorous motion, reining in his leaping horse. The representation of St George on a black, rather than white horse is extremely rare, which accounts for the icon’s popular name, ‘the Black George’. He is shown with a halo, and a red cloak billowing behind. He raises himself in his stirrups and spears the serpent-like dragon in the mouth. The background is plain, divided into two blocks of colour, indicating the land and sky. An inscription in the upper right hand corner in Cyrillic script identifies the saint.