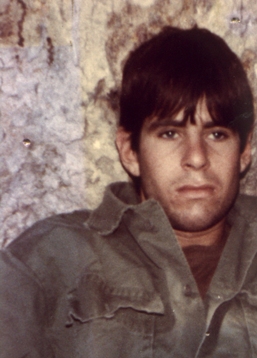 War is based on our human instinct for survival. A palpable danger of death is something that you feel in every cell in your body. At first when you enter that reality, a reality that is so extreme compared to what you are familiar with in which the most violent action up to that point had been to kill a cockroach. You are in total shock – your reactions are slow, you respond slowly. I remember that I stood outside just as we went in, in the morning and suddenly there was a small noise and I didn’t understand and I looked, I looked down I saw the backpack starting to move and I saw shaving cream flying. I remember looking at it and it took me a moment to understand that they must be shooting at me. I was lucky.

You need to decide – they tell you, every movement or sound from a balcony – you fire. Now, in some of the instances someone is aiming a missile at you and in some of the instances it’s a family on the balcony, and sometimes the person who is aiming a missile at you holds a little girl in front of him so that you will think that it is a family. If you hesitate for a moment, someone shoots you – you’re dead, the story’s over. Or someone else is dead.

The instinct to survive, passion, and violence – those are our basic instincts. Your sense of taste begins to disappear; you eat anything that is available. Your hearing and vision become more acute, you can sleep just three hours a night and you are not tired. Every moral system is neutralized. I can compare it to a kind of drug. After the third or fourth day you no longer care. It’s the body’s defense mechanism for the soul. The boy who was there was not me.

It makes me laugh when people ask whether Zahal is a moral army. The option to be moral in a war does not exist. It exists, but the formula is very simple: If you want to protect your soldiers, you cannot be moral. If you choose to act morally, more of your soldiers will die. The movie is called Lebanon, but it is relevant to any war. That is why the name of the movie is a mistake. I know. [laughter]