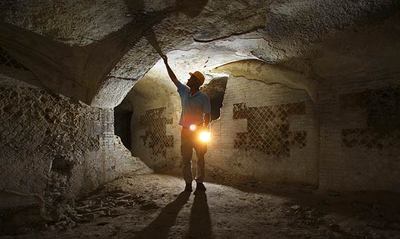 A lavish Roman amphitheatre, complete with toilet, has been uncovered by British archaeologists in Italy at a site described as being of the same significance as Stonehenge.

Professor Simon Keay, the project director, said: «[The amphitheatre’s] design, using luxurious materials and substantial colonnades, suggests it was used by a high-status official, possibly even the emperor himself.

«The activities that took place there were strictly private: it could have been games or gladiatorial combat, wild beast baiting or the staging of mock sea battles, but we really do not know.» Archaeologists also discovered a well-preserved Roman toilet in a room made of marble near the outside wall of the amphitheatre. It is still possible to sit on the toilet, which was designed to be used by three people at a time and had holes in the front so that users could clean themselves with a brush.

Rose Ferraby, from Cambridge, who helped with the discovery, said: «We are taking out the dirt from the toilet, which is basically ancient human waste, and sampling it to find seeds and even parasites so we can build a picture of diet and the people who were here.

«Toilets also bring up good finds because people tend to lose things down them, like rings, and they are not keen to recover them.

«It’s a very important find and a total surprise but it’s also very human — everyone can relate to a toilet.»

Professor Keay is certain that the discoveries at Portus are of great historical significance. «This is one of the most important archaeological sites in the world,» he said. «Certainly it should be rated alongside such wonders as Stonehenge and Angkor Wat in Cambodia.»