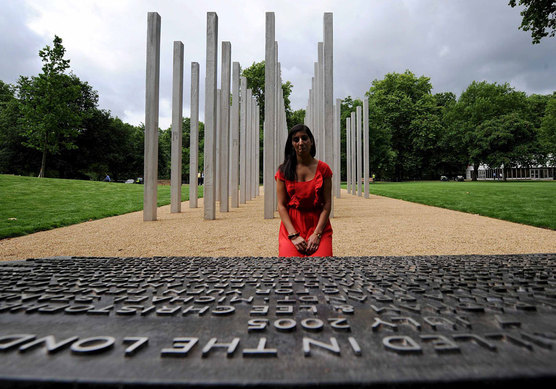 A cluster of 52 rough-cast stainless steel columns was opened in London’s Hyde Park on Tuesday, the fourth anniversary of the 7/7 bombings which they commemorate.

The memorial is an ingeniously simple, starkly elegant composition, with each column representing a victim. The four separate bomb sites (Underground stations Russell Square, Aldgate and Edgware Road and a bus at Tavistock Square) are picked out in four subtle shifts in the grid on which they stand.

Designed by Carmody Groarke, the London architects, in collaboration with the victims’ families and in consultation with Anthony Gormley, the artist, the memorial which works both as a single sculptural group and as a marker to each of the 52 people who were killed. The architects say it captures «the notion of the singular and the collective loss».

The columns, standing 3.5m tall and with the place and time of the bombs inscribed in relief on each stele, evoke the presence of the human figure, the unifying effect of tragedy and, in their rough cast surface, the memory of the intense heat both of their making and of the moments of the explosions.