The developments come amid growing impatience with Mrs Morgan’s handling of Trojan Horse scandal, in which radical Muslims in Birmingham conspired to “Islamise” state schools, force out secular heads and impose an “intolerant Islamic ethos”.

Last week, the government commissioner who investigated the issue, Peter Clarke, said the revelations so far were merely the “tip of the iceberg” and disputed Mrs Morgan’s claim that the Government had “got to the bottom of the problem”.

Mrs Morgan was also criticised last week by MPs on the education select committee for her “complete lack of urgency” amid indications that the plot was flaring up again and key individuals were still active in education.

Under his leadership, Park View segregated boys and girls, invited an extremist speaker to address pupils, told children who did not pray that they were not proper Muslims, and restricted the syllabus in line with “conservative Islamic teaching”. Mr Hussain also set up a closed group for certain Park View teachers on WhatsApp, a mobile messaging app, which promoted grossly extremist and bigoted views. He delivered “mind-blowing” anti-American assemblies to children, according to witnesses.

However, last month Mr Hussain helped to set up the Aim-High Private Tuition and Education Centre in Wolverhampton. It offers “specialised intensive courses” for children at “all levels from Key Stage 1 to A-level” and was advertised on his Facebook page. Companies House records show that Mr Hussain’s wife, Salma, also known as Salma Akhtar, is Aim-High’s sole director. 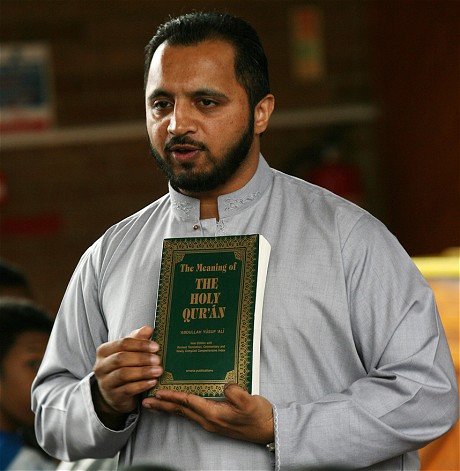 The banning regulations do not apply to private tuition colleges not registered with the Department for Education, but MPs last night said that they should. “It is just wrong, given what we know about his views and his actions, that Mozz Hussain should have any role in education,” said Khalid Mahmood, Labour MP for Birmingham Perry Barr. “Parents sending their children to this college have no means of knowing that one of the main Trojan Horse plotters is involved in it.”

DfE sources said that the Disclosure and Barring Service, which prevents unsuitable people working with children, could be used to ban Mr Hussain from involvement in any kind of unsupervised teaching, training or instruction of young people.

A DfE spokesman said: “Mr Hussain has been made subject to an interim prohibition order to prevent him teaching in all mainstream schools. Clearly anyone who has been prohibited from teaching is not a suitable person to provide any sort of education for children.”