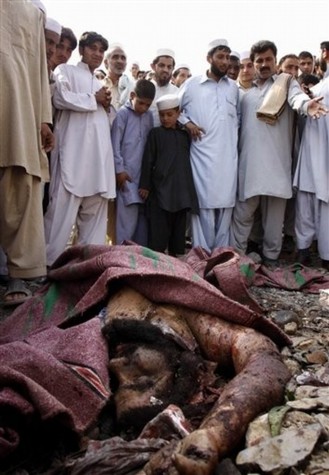 The Pakistani central government has relatively little control in some areas bordering Afghanistan and has tolerated or even ignored the creation of Taliban and al-Qaida havens inside Pakistan.
In a direct challenge, Obama said Pakistan must show a commitment to hunt down the extremists within its borders.
«We will insist that action be taken one way or another when we have intelligence about high-level terrorist targets,» Obama said.
Obama called the mountainous border region of Afghanistan and Pakistan «the most dangerous place in the world.»
«This is not simply an American problem — far from it,» Obama said. «It is, instead, an international security challenge of the highest order. Terrorist attacks in London and Bali were tied to al-Qaida and its allies in Pakistan, as were attacks in North Africa and the Middle East, in Islamabad and Kabul. If there is a major attack on an Asian, European, or African city, it, too, is likely to have ties to al-Qaida’s leadership in Pakistan.»
The president added: «The safety of people around the world is at stake.»

Obama: Taliban and al-Qaida must be stopped