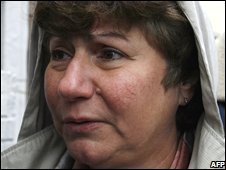 Karina Moskalenko, who represents some of the Kremlin’s best known critics, fell ill after finding a substance similar to mercury inside her car.

She and members of her family were later treated for nausea and headaches.

Prosecutors said there had not been enough of the substance to endanger life, but that more tests were needed.

The lawyer said on Tuesday that her illness had meant she was unable to travel to Moscow on Wednesday for a preliminary hearing at the trial of three men charged with Ms Politkovskaya’s murder.

«Was it a demonstration, which I only noticed too late, or on the contrary, did I notice it too soon, and the plan was that it should travel with us for longer?»
Karina Moskalenko

«People do not put mercury in your car to improve your health,» she told Russia’s Ekho Moskvy radio station. «I am very concerned because there were children in that car.»

«The question that preoccupies me now is: was it a demonstration, which I only noticed too late, or on the contrary, did I notice it too soon, and the plan was that it should travel with us for longer?»

One of Ms Moskalenko’s colleagues, Anna Stavitskaya, also said the incident appeared to be «an attempt at intimidation» linked to the trial, and that she would ask for the hearing to be postponed.

Symptoms of mercury poisoning can include memory loss, mood instability, headaches and visual and hearing problems. It can also damage the immune system and kidneys.

An assistant prosecutor in Strasbourg said an investigation had been opened into the incident. He also said Ms Moskalenko and her family had been invited to undergo a medical examination to check if they had been contaminated.

«The circumstances as well as her background are such that she is concerned,» Claude Palpacuer told the Reuters news agency.