The Transatlantic Relationship on the 75th Anniversary of D-Day 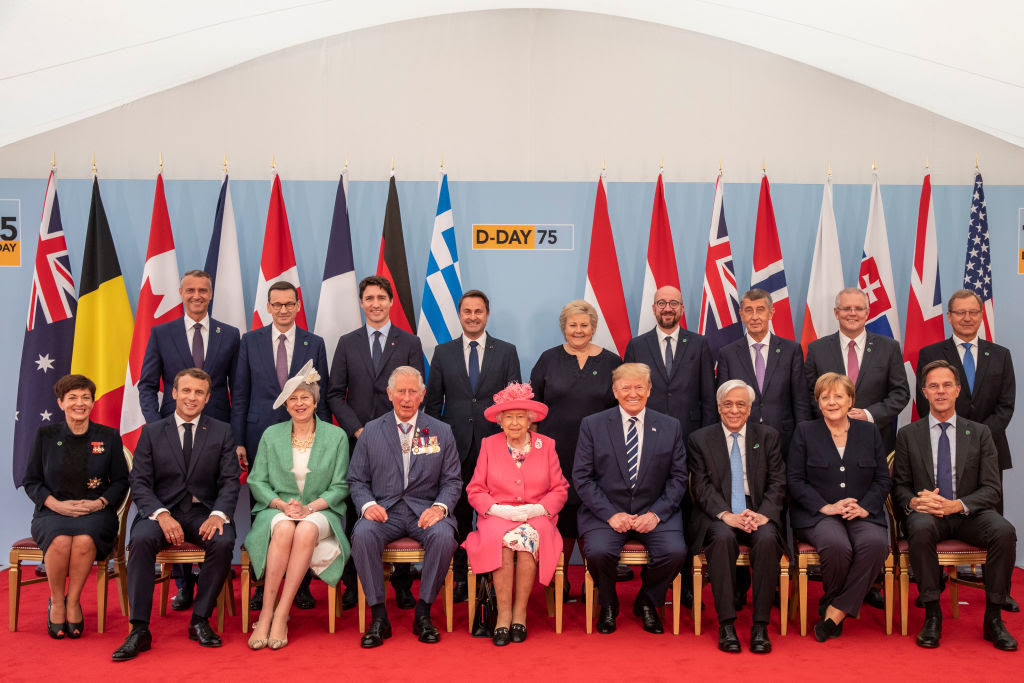 US President Donald Trump’s attendance at this week’s commemorations to mark the 75th anniversary of the D-Day landings in northern France comes at a time when the future of the transatlantic relationship between the US and Europe is under unprecedented strain. (Image source: Jack Hill – WPA Pool/Getty Images)

US President Donald Trump’s attendance at this week’s commemorations to mark the 75th anniversary of the D-Day landings in northern France comes at a time when the future of the transatlantic relationship between the US and Europe is under unprecedented strain.

The Normandy landings, which began on June 6 and resulted in Allied forces achieving the remarkable feat of delivering 156,000 troops on to the shores of northern France, unquestionably represents the high water mark of the transatlantic relationship.

Not only did it ultimately result in the defeat of Nazi Germany and end the reign of terror it had instituted over much of Europe. It also led to the formation of the close alliance between the Western democracies of the free world in the existential battle with the Soviet Union during the Cold War.

And yet, despite the significant victories the alliance achieved against these two significant foes, serious concerns are now being raised as to whether the alliance has the resilience to meet future challenges, from the emergence of China to the destabilizing policies of rogue states like Russia and Iran.

It is not just the personal dislike many Europeans claim to have for Mr Trump himself that threatens the future well-being of the relationship, although the childish antics of anti-Trump protesters in Britain this week, where the president is on a three-day state visit, hardly help the cause of transatlantic cooperation.

While the British government literally rolled out the red carpet for the 45th US President, with Mr Trump receiving a warm welcome from the Queen at Buckingham Palace, the magnificent pomp and ceremony of the royal occasion will have been somewhat undermined by the appearance of the «Trump baby» balloon in the skies over London.

If the balloon’s re-appearance — it made its debut during Mr Trump’s brief visit to London last year — signifies the deep dislike many left-wing politicians, such as Sadiq Khan, the Mayor of London, and Labour party leader Jeremy Corbyn have for Mr Trump, there are other, more worrying trends, that raise questions about whether the alliance can survive in years to come.

Foremost among these remains the refusal of a number of European countries, such as Germany, to pay their fair share towards the cost of maintaining NATO, the military alliance whose origins date back to the close cooperation forged between the Allies during World War II.

Even though European leaders, at the 2014 NATO summit in Cardiff, pledged to meet NATO’s minimum defence spending requirement of 2 percent of GDP by 2024, the Trump administration is becoming increasingly frustrated by the failure of a number of European leaders to fulfil their obligations.

For example, at a recent meeting with German Chancellor Angela Merkel in Washington, US officials were shocked when Mrs Merkel said she had no intention of meeting the target by 2024, but that Germany might be able to reach it by 2030.

Given the closeness of Germany’s relationship with Russia, particularly over the construction of the controversial Nord Stream 2 gas pipeline, which will supply Berlin’s energy needs for decades to come, this attitude suggests Germany is more interested in its relations with Russia than sustaining the NATO alliance.

For a president who is already critical of the Europeans’ failure to pay for defending their continent, this cavalier attitude can hardly be deemed constructive.

Iran is another issue where the Europeans’ insistence of going their own way over the 2015 nuclear deal has caused unnecessary friction with Washington. As signatories to the deal that former President Barack Obama helped to negotiate with the ayatollahs in 2015, Britain, France and Germany continue to insist that the Joint Comprehensive Plan of Action (JCPOA) remains the best means of preventing Iran from acquiring nuclear weapons.

To that end they have encouraged European firms to continue trading with Tehran even if, by so doing, they run the risk of being penalised by the US.

The divergence of opinion between Europe and the US over Iran is likely to deepen further if Washington fulfils its promise to present the UN this week with clear evidence that Iran was involved in recent acts of terrorism in the Gulf, including planting four explosive devices on oil tankers anchored in the Gulf.

If, as seems increasingly likely, it can be proven that Iran was responsible for the recent escalation in tensions in the Gulf region, then Europe’s insistence on trying to save the nuclear deal will be even harder to justify.

And the longer such differences of opinion exist between the US and Europe on key policy areas, whether it is NATO funding or Iran’s nuclear programme, the greater the tensions within the transatlantic alliance are likely to be. Therefore, in order to prevent irrepairable damage to this vital relationship, this approach is short-sighted on the part of the Europeans. What the free world needs is a strong NATO to defend democracy against autocratic regimes like China and Russia, not one that is distracted by unnecessary internal squabbles, lest the transatlantic alliance one day cease to exist.

Con Coughlin is the Telegraph’s defence and foreign affairs editor.

The Transatlantic Relationship on the 75th Anniversary of D-Day
by Con Coughlin
June 6, 2019 at 5:00 am