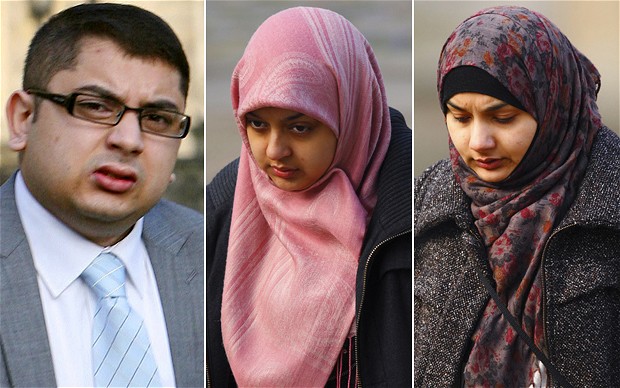 Shamima was bundled into a car by sisters Nadiya, 25, Nazira, 29, and brother Kayum Mohammed-Abdul, 24, outside a Basingstoke restaurant when they saw her kissing work colleague Gary Pain on April 1 last year.
The jury heard how an «extremely aggressive and threatening» Mohammed-Abdul grabbed Mr Pain by the neck as Miss Akhtar was «firmly escorted» to the car and thrown in.
The car was driven back to the family home in Basingstoke, Hants, where it’s alleged she was dragged onto the sofa, called a whore and a prostitute and then had her waist-length hair cut to her neck by her two older sisters.
The jury heard how Shamima was punched by her sister Nadiya and overheard her brother on the phone, saying «Get the gun, I need the boys tonight.»
He is then alleged to have presented his sister with two knives and a hammer and asked her to «pick one to be used» on her and «one to be used on her lover boy», Winchester Crown Court heard.

Miss Akhtar came from a strict Islamic family and was controlled by her siblings, but she considered herself Westernised, the court heard.
She had started to work at Argos and got permission from her family to celebrate her 18th birthday with work colleagues, on the night of the alleged assault, telling her family that her workmates were all female.
As her siblings arrived to pick her up they spotted her sharing a kiss with colleague Mr Pain.
Shamima claims she was imprisoned for approximately 12 hours and called the police as soon as her brother and eldest sister had left the house.
All three defendants deny kidnapping her on April 1 last year as well as actual bodily harm and false imprisonment.
Mohammed-Abdul denies assaulting Mr Pain and the two sisters also pleaded not guilty to assaulting Shamima.
The case continues.