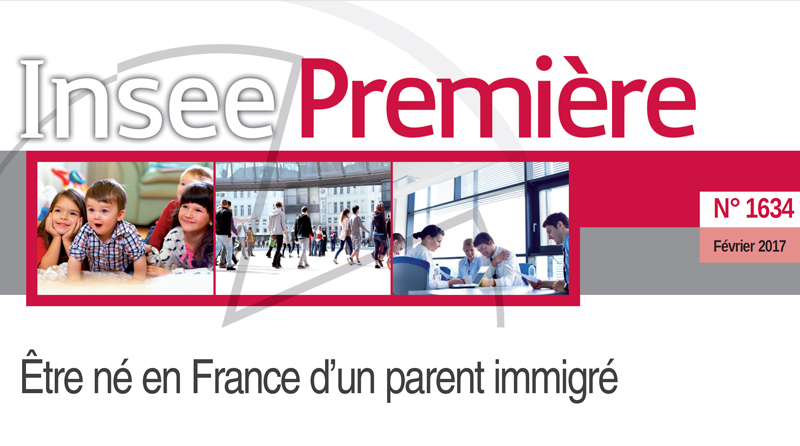 From time to time, France’s National Institute of Statistics and Economic Studies (Insee) offers a glimpse of the ethnic composition of French society. The study, «Being born in France to an immigrant parent» (Être né en France d’un parent immigré), published in February 2017, is one of them.

Like few other glimpses, the Insee study offers a partial view of the ethnic composition of the French population. A statistical breakdown — with the answer to the perennial question: how many Muslims in France? — would be perceived as discriminatory and outrageous. Given France’s «integration model,» nobody should dare identify people by their origins, religion, color of skin and so on. A Frenchman is a Frenchman, whatever the color of his skin or his religion, and any measurement of the sub-Saharan population — for example, their level of education, that of their children, the type of jobs their parents are doing, how many times they go to mosque or if they have spent time in prison — is illegal, discriminatory and racist. Sub-Saharan populations must disappear in aggregate data about French people.

The study, however, provides some telling information. In 2015, 7.3 million people born in France had at least one immigrant parent (11% of the population). Of these 7.3 million people, 45% are of European origin, most of whom are children of immigrants who arrived in France from Spain (8%) or Italy (12%) as early as the 1930s, or from Portugal in the 1970s onwards. One can assume, although it is not written in the study, that these people are of Christian origin.

Another group is composed of Africans. 42% of the 7.3 million children born in France to an immigrant parent are of African background, mainly North Africa. They came from Algeria (15%), Morocco (11%), Tunisia (5%) and sub-Saharan Africa (11%). Although it is also not specified in the study, it would seem that the great majority are Muslim.

Another group, children from Turkish migrant families, represent 4% of the 7.3 million. These people are classified as Asian; they are not included in the African and Muslim group. Most of these Turks are also presumably Muslim.

A conclusion therefore would assume that 46% of the descendants of immigrants are Muslim and 45% are Christian. The remaining 9% are from East Asia or the Americas.

Criticizing the limited data of this study, Michèle Tribalat, a French demographer, published some personal conclusions in Atlántico, a news website. First, Tribalat expressed her regrets «not to have the population figures of persons of foreign origin for two generations». But, she said, it is not so difficult to compile it one’s self.

«If we add the two generations (immigrants and children of immigrants), this gives a total of 13.5 million, or 20.4% of the population. Thus, we have slightly more than one inhabitant out of five of foreign origin, across two generations, in 2015».

Asked by Gatestone how she came to the 13.5 million figure, she replied:

Consequently, France’s population is increasing significantly only because of immigration. But which immigration? Christian or Muslim? Tribalat continues:

These conclusions are confirmed by another Insee study, «Demography of the descendants of immigrants» (Démographie des descendants d’immigrés), published in 2014.

In other words, if the Muslim population of France can be estimated at around 6 million today, it could grow to 12 million by 2020-2025.

This figure does even not take into consideration the Muslim population that immigrated to France from North Africa in the 1960s and early 1970s. There are a few million of them — nobody knows how many exactly. They became French very early, and for demographers, their grandchildren and great-grandchildren are not regarded as immigrants anymore. These Muslims are, rather, integrated into statistics as French citizens born of French parents. They are Muslim, but under the statistics radar.

France’s Muslim population could quickly grow to close to 15-17 million, but no one can know precisely unless the law prohibiting the official collection of ethnic data is changed.

These questions are not spoken about openly in the fierce pre-election presidential debate raging in France. The question is not politically correct. But in these times of expanding Islamism, they weigh silently in favor of Marine Le Pen.

Yves Mamou is a journalist and author based in France. He worked for two decades for the daily, Le Monde, before his retirement.