Two of the most tragic Islamic attacks on Christians, killing several women and children, took place in the month of October, one in Syria, another in Egypt. 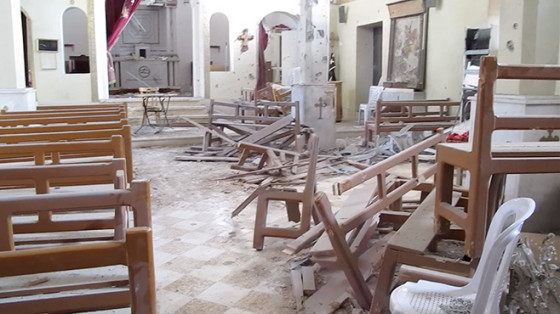 On October 21 in Syria, U.S.-supported Islamist rebels invaded and occupied the ancient Christian settlement of Sadad for over a week, until ousted by the Syrian army. What took place that week was «the largest massacre of Christians in Syria,» in the words of Orthodox Archbishop Alnemeh. Among other things, 45 Christians—including women and children—were killed, several were tortured to death; mass graves were discovered; all of Sadad’s 14 churches, some ancient, were ransacked and destroyed; the bodies of six people from one family, ranging from ages 16 to 90, were found at the bottom of a well (an increasingly common fate for «subhuman» Christians). 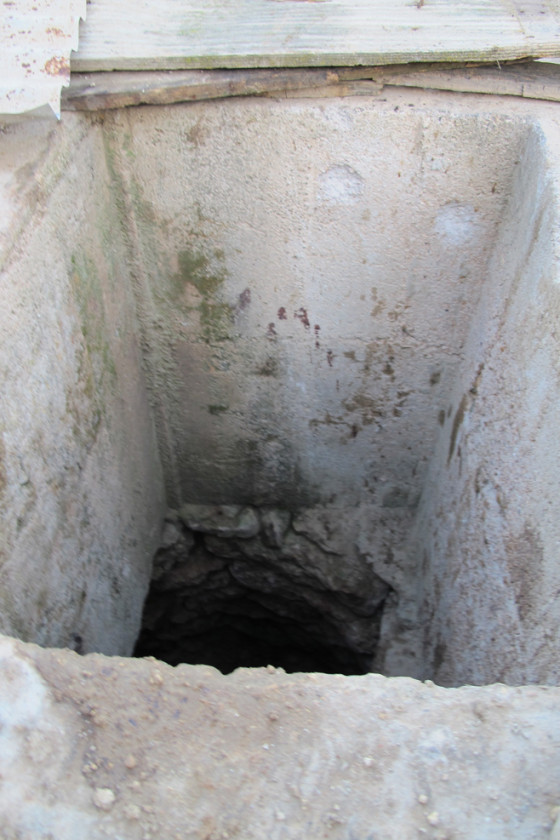 The jihadis also made a graphic video (with English subtitles) of those whom they massacred, while shouting Islam’s victory-cry, «Allahu Akbar!» [«Allah is Greater!,» meaning «than anything»]. Another video, made after Sadad was liberated, shows more graphic atrocities.

The day before rebels invaded Sadad, on Sunday, October 20, the Church of the Virgin Mary in Warraq, near Cairo, Egypt, was attacked during a wedding ceremony. The attack left four dead and nearly two dozen wounded. According to a report issued by a forensic team, two of those murdered were young girls, each named Mary: 12-year-old Mary Nabil Fahmy, who was shot five times in the chest, and 8-year-old Mary Ashraf Masih («Masih» meaning «Christ»), who was shot in the back.

The security forces charged with protecting the church were seen leaving their posts immediately before the massacre began, as happens frequently in Egypt and other Islamic nations. In the words of Asia News, «Eye-witnesses of the al-Warraq attack confirm that despite numerous distress calls, police and ambulances only arrived on the scene two hours after the shooting.» 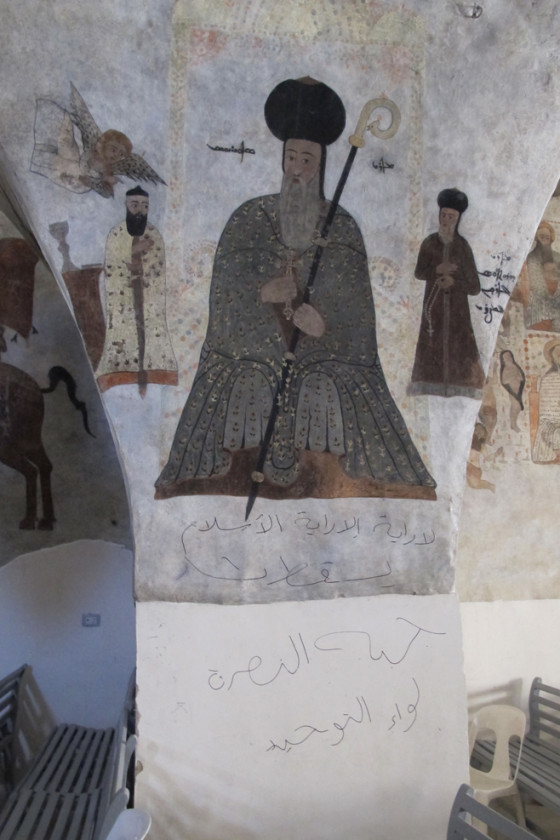 These massacres in Syria and Egypt received scant attention and even less condemnation from Western media and governments. Instead, people such as Mohamed Elibiary, an Obama administration Homeland Security adviser, condemned Copts who raise awareness of anti-Christian violence in Egypt as promoting «Islamophobic» bigotry.

Although Christians are habitually killed in Muslim countries, as this series attests, the U.S. government rarely condemns the practice or even acknowledges it. When five Muslims were killed in western Burma, however, the U.S. issued a formal condemnation, according to Voice of America, «urging authorities to do more to address the long-standing sectarian tension there.»

The rest of October’s roundup of Muslim persecution of Christians around the world includes (but is not limited to) the following accounts, listed by theme and country in alphabetical order, not necessarily according to severity:

Bangladesh: «A local government official in central Bangladesh has halted the construction of a church, forced Christians to worship at a mosque and threatened them with eviction from their village unless they renounce their faith,» said Morning Star News. «The Tangail Evangelical Holiness Church in Bilbathuagani village… was created Sept. 8 by a group of about 25 Christians who had been meeting secretly for three years. However, local council chairman Rafiqul Islam Faruk joined around 200 demonstrators Sept. 13 to protest against the start of the building of the church. The following day, the Christians were summoned to his office. More than 1,000 Muslims waited outside, following an announcement at all local mosques to gather at the chairman’s office.» There, they were ordered to embrace Islam or suffer the consequences. Said one of the Christians: «Their threats chilled me to the bone. That is why I pretended to accept Islam, but faith in Christ is the wellspring of my life.» Another said: «The chairman is clipping the wings of our faith. I do not know how long we can grin and bear it. We want religious freedom. We want to practice our religion freely.» Since Sept. 14, under the chairman’s orders, eight Christians agreed to return to Islam. Apparently, the chairman and his associates had already beaten some of these Christians three years ago for accepting Christianity.

Iran: Mariam Naqqash, a female convert to Christianity, was sentenced to four years in prison by a court in Tehran. The Christian convert was found guilty of «endangering national security by spreading religious propaganda in the country,» and allegedly being a spy for Britain and Israel. According to Adnkronos News, «renouncing the Muslim faith is punishable [in Iran] with the death penalty. Over 300 Iranian converts to Christianity have been arrested over the past two years, according to opposition websites.»

Kazakhstan: After Bakhytzhan Kashkumbayev, a 67-year-old pastor, was released from five months’ detention, based on charges his family and others insist are spurious. After being reunited with his family, he was arrested again within minutes, now accused of «propaganda of terrorism or extremism, or public calls to commit an act of terrorism or extremism, as well as the distribution of material of the content indicated.» His son, Askar, told Forum 18 News Service, «These new accusations are complete rubbish. They’re trying to turn my father into a terrorist.» Grace Church in Astana, where Kashkumbayev served, has, according to the report, long been subject to state harassment, including accusations of being involved in espionage, fraud, money laundering, distributing extremist texts and using hallucinogenic communion drinks.

Kenya: Charles Matole, pastor of the Redeemed Gospel Church, was found shot dead while still sitting with a Bible on his lap: «We found him with blood oozing from the head,» said a choir member. The pastor had been receiving threatening phone text messages. Similarly, Pastor Ebrahim Kidata of the East African Pentecostal Churches was found murdered, strangled to death, in a patch of bushes.

Egypt: After Muslims in al-Minya district accused a young man of having an illicit relationship with a Muslim woman, violence erupted against the village’s Christians (see September report). The father of the Christian man insists that there was no relationship between his son and the Muslim woman, whose family, in his words, «actually had their daughter undergo a gynecological exam, which proved the woman is ‘untouched’ [a virgin].» Instead, according to the father and many Copts in the village, «the whole story was fabricated by Muslim hard-liners from neighboring village to cause sectarian strife.» According to a separate Arabic report, «criminal groups and gangs managed to acquire guns and weapons and, as usual, have attacked and abused the Christians … [and] forced Copts to pay large amounts of money as tax [jizya] in order not to steal and/or plunder their lands.» The report also points out that no one does anything to oppose these gangs: «they simply kill Christians and their families as happened in the village of Shameiya when two Copts refused to pay the tax: the gang killed them and this was repeated in many other villages belonging to the governorate of Asyut. It is becoming so normal now to watch as these crimes against Christians occur day by day and nothing is done.»

Indonesia: Still insisting that Susan Jasmine Zulkifli, a Christian woman appointed governor of the sub-district of Lenteng Agung, in West Java, be removed solely because of her faith (see September report), Muslim protesters stepped up their threats, including carrying a coffin in a protest march of some 600 Muslims—a clear death threat —and waving flags symbolic of death. The Christian woman had been promoted in June by the Governor of Jakarta, who said in response: «I make my choices based on merits, not looking at religion.»

Iran: After being arrested in a house church December 2012 and charged with consuming alcohol in violation of the Islamic theocracy’s laws, four Christians were sentenced to 80 lashes for drinking communion wine. «The sentences handed down to these members of the Church of Iran effectively criminalize the Christian sacrament of sharing in the Lord’s Supper and constitute an unacceptable infringement on the right to practice faith freely and peaceably,» a human rights activist said.

Iraq: The nation’s Christians, more than half of whom have fled since the U.S.-led invasion a decade ago, are now also being targeted in and fleeing from northern Iraq, which until recently was considered a relatively safe region for Christians fleeing violence in the south. Recently, for example, a suicide bomb went off outside the home of Christian politician Emad Youhanna in Rafigayn, part of the Kirkuk province, injuring 19 people, including three of his children. Several more bomb attacks have also taken place in the northern city of Erbil, for which al-Qaeda claimed responsibility. According to Christian News, «In early September, Christians in the village of Deshtakh complained that they were facing harassment from local police. A group of Christian young people said that policemen told them that they ‘should not be in Iraq because it is Muslim territory.’ Violence in the south of the country is also escalating. Church leaders in Baghdad say that there are attacks on Christians every two or three days.»

Lebanon: Muslims in the historically Christian nation are appropriating Christian land. According to Agenzia Fides: «An urgent reminder to curb the misuse of land belonging to Christians in order to build housing for the Muslims was launched on Monday, October 14 from Talal al- Doueihy, leader of the Movement ‘Lebanese Land, our Land’…. Across the Country there are outbreaks of clashes due to problem regarding land. Last week, in the Christian village of Alma (district of Zghorta) residents had complained that the Muslims of the area of al-Fuar had begun to build houses without permission. Already at the end of August, the same Maronite Patriarch Bechara Boutros Rai had called Christians to limit the sale of their property to avoid jeopardizing the demographic-confessional balance.»

Pakistan: After the bombs in the church of All Saints in Peshawar, where nearly 90 people, including many women and children, died, Agenzia Fides reported that, «the situation remains tense in the Pakistani society: not only tragedy but also horror. The Christians said they were ‘horrified’ by the rumors that link the bombs in Peshawar to the vast problem of organ trafficking: this is what some members of NGOs in civil society in Pakistan told Fides. Some of the ‘jackals,’ presumably local paramedics, seem to have taken advantage of the high number of deaths and injuries in order to steal the bodies of victims and exploit them for the illegal organ trade. ‘If this were true, it would mean that there are criminals who are taking advantage of the suffering of Christian victims in a truly blasphemous and sacrilegious manner,’ notes Fr. Mario Rodrigues, a priest of Karachi.» Meanwhile, some of the Christian survivors who mourned the deaths of loved ones too openly, wereattacked, beaten, and threatened with death. Finally, in a separate story, a Christian, Harrison Masih, working in a store, who used to debate religion with a Muslim customer, Maulvi Khalad, got into an argument when Khaladtried to get him to convert to Islam, «telling him that he would enter paradise that way.» But, as Harrison related, because he refused to convert and apparently did not want want any trouble, «I quit my job at the medical store but Khalid, and three other men, came to my house and threatened me and my family.»

1) To document that which the mainstream media often seems to fail to report.

2) To suggest that such persecution is not «random» but systematic.