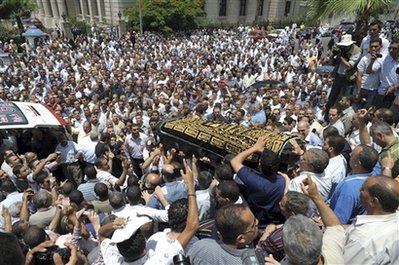 Thousands of Egyptian mourners marched behind the coffin of the «martyr of the head scarf» on Monday — a pregnant Muslim woman who was stabbed to death in a German courtroom as her young son watched.

Many in her homeland were outraged by the attack and saw the low key response in Germany as an example of racism and anti-Muslim sentiment.

Her husband was critically wounded in the attack Wednesday in Dresden when he tried to intervene and was stabbed by the attacker and accidentally shot by court security.

«There is no god but God and the Germans are the enemies of God,» chanted the mourners for 32-year-old Marwa al-Sherbini in her hometown of Alexandria, where her body was buried after being flown back from Germany.

«We will avenge her killing,» her brother Tarek el-Sherbini told The Associated Press by telephone from the mosque where prayers were being recited in front of his sister’s coffin. «In the West, they don’t recognize us. There is racism.»

Al-Sherbini, who was about four months pregnant and wore the Islamic head scarf, was involved in a court case against her neighbor for calling her a terrorist and was set to testify against him when he stabbed her 18 times inside the courtroom in front of her 3-year-old son.

Her husband, who was in Germany on a research fellowship, came to her aid and was also stabbed by the neighbor and shot in the leg by a security guard who initially mistook him for the attacker, German prosecutors said. He is now in critical condition in a German hospital, according to al-Sherbini’s brother.

«The guards thought that as long as he wasn’t blond, he must be the attacker so they shot him,» al-Sherbini told an Egyptian television station.

The man, who has only been identified as 28-year-old Alex W., remains in detention and prosecutors have opened an investigation on suspicion of murder.

Christian Avenarius, the prosecutor in Dresden where the incident took place, described the killer as driven by a deep hatred of Muslims. «It was very clearly a xenophobic attack of a fanatical lone wolf.»

He added that the attacker was a Russian of German descent who had immigrated to Germany in 2003 and had expressed his contempt for Muslims at the start of the trial.

At its regular news conference on Monday, a German government spokesman Thomas Steg said if the attack was racist, the government «naturally condemns this in the strongest terms.»

The killing has dominated Egyptian media for days, while it has received comparatively little coverage in German and Western media.

A German Muslim group criticized government officials and the media for not paying enough attention to the crime.

«The incident in Dresden had anti-Islamic motives. So far, the reactions from politicians and media have been incomprehensibly meager,» Aiman Mazyek, the general secretary of the Central Council of Muslims, told Berlin’s Tagesspiegel daily.

Egyptian commentators said the incident was an example of how hate crimes against Muslims are overlooked in comparison to those committed by Muslims against Westerners. Many commentators pointed to the uproar that followed the 2004 murder of filmmaker Theo van Gogh by a Dutch-born Islamic fundamentalist angry over one of his films criticizing the treatment of Muslim women.

Abdel Azeem Hamad, chief editor of the independent Egyptian daily el-Shorouk, said that if the victim had been a Jew, there would have been an uproar.

«What we demand is just some attention to be given to the killing of a young innocent mother on the hands of fanatic extremist,» he wrote in his column.

An Egyptian blogger Hicham Maged, wrote «let us play the ‘What If’ game.»

«Just imagine if the situation was reversed and the victim was a Westerner who was stabbed anywhere in the world or — God forbid — in any Middle Eastern country by Muslim extremists,» he said.

The Egyptian Pharmacists’ Association called for a boycott of German drugs. The victim was a pharmacist.

According to numerous interviews in Egyptian local papers with el-Sherbini family, the man who stabbed al-Sherbini used to accuse her of being a «terrorist,» and in one incident, he tried to take off her head scarf. Mourners at her funeral called her the «martyr of the head scarf.»

Laila Shams, al-Sherbini’s mother, told the el-Wafd daily that her daughter said she’d difficulty finding a job in Germany because of her head scarf.

«One (employer) suggested she remove her head scarf to get a job. She said no,» she said.

Officials from a German Muslim group and the country’s main Jewish group made a joint visit Monday to the Dresden hospital where the victim’s husband is being treated.