«What I think is important about the Muslim Brotherhood,» British Prime Minister David Cameron said on April 1, while announcing a long-overdue investigation of the activities of Muslim Brotherhood in the UK and its involvement in February’s terror attack at the Egyptian resort of Taba, «is that we understand what this organisation is, what it stands for, what its beliefs are in terms of the path of extremism and violent extremism, what its connections are with other groups, what its presence is here in the United Kingdom. Our policies should be informed by a complete picture of that knowledge. It is an important piece of work because we will only get our policy right if we fully understand the true nature of the organisation that we are dealing with.»

The Egyptian Brotherhood’s reaction, published on its English website, was immediate:

The Muslim Brotherhood has always had a perfectly reputable and verifiable history record and a correct understanding of religion ever since it was founded, more than 86 years ago. The group is ready and willing to cooperate with all efforts to understand its beliefs, policies and positions. It also denounces all media campaigns that try to demonize the group and link it to violent incidents which it condemned in no ambiguous terms at the time, the most recent of which was the attack on a tourist bus in Taba (in Egypt’s Sinai peninsula) in February 2014.[…]

The Brotherhood’s press release also pointed out the long-standing relationship between the Muslim Brotherhood and the UK:

First: The Brotherhood was surprised at the latest remarks, since all successive British governments had always been the most expertly informed about the group’s positions and peaceful approach. The group has not and will not change its principles or approach no matter how big or small it becomes, notwithstanding all the injustice it suffers, the cold-blooded murders and arbitrary arrests of its members.

Second: The group’s principles and ideology, which it has been teaching its members for more than eighty years in all parts of the world, from East to West, have been announced, published and thoroughly researched and studied by many Muslim and non-Muslim scholars, researchers and research centers all over the world – all of which affirmed, time and time again, that the group’s approach is perfectly peaceful and that all its methods are non-violent.

The Muslim Brotherhood has indeed had a long history of relations with Britain. In 2010, Mark Curtis publishedSecret Affairs: Britain’s Collusion with Radical Islam, a well documented essay that could save David Cameron a lot of research work. Curtis writes,

By 1942 Britain had definitely begun to finance the Brotherhood. On 18 May British embassy officials held a meeting with Egyptian Prime Minister Amin Osman Pacha, in which relations with the Muslim Brotherhood were discussed and a number of points were agreed. One was that ‘subsidies from the Wafd [Party] to the Ikhwani el Muslimin [Muslim Brotherhood] would be discreetly paid by the [Egyptian] government and they would require some financial assistance in this matter from the [British] Embassy.

A British embassy report from Cairo in late 1951 stated that the Brotherhood ‘possess[es] a terrorist organisation of long-standing which has never been broken by police action’, despite the recent arrests. However, the report otherwise downplayed the Brothers’ intentions towards the British, stating that they were ‘planning to send terrorists into the Canal Zone’ but ‘they do not intend to put their organisation as such into action against His Majesty’s forces’. Another report noted that although the Brotherhood had been responsible for some attacks against the British, this was probably due to ‘indiscipline’, and it ‘appears to conflict with the policy of the leaders’. (emphasis added)

Curtis’s analysis therefore emphasizes the cooperation and, more importantly, the relativistic approach of the British government to movement founded by Hasan al-Banna.

The Muslim Brotherhood’s astonishment at the British Prime Minister’s decision is therefore justified. The Prime Minister, MI5 and MI6 should presumably know the history and aims of the Muslim Brotherhood in Britain. Islamist movements have different tactics and ways to act, but their goal is always the same and has always been clear: Get in and impose sharia law to establish an Islamic state.

In 2007 Yusuf al-Qaradawi — the Brotherhood’s most important and well known theologian, president of the Dublin-based European Council for Fatwa and Research, invited several times to London when Ken Livingstone was its Mayor — openly declared: «The conquest of Rome, the conquest of Italy and Europe means that Islam will return to Europe once again. Must this conquest necessarily be through war? No, it is not necessary. There is such a thing as a peaceful conquest. The peaceful conquest has foundations in this religion. So I imagine that Islam will conquer Europe without using violence. It will do so through predication and ideology.»

Al-Qubaysi then asked Refaat al-Said, the leader of the Egyptian Socialist Party al-Tagammu’ Refaat, to comment on Akef’s statements. Al-Said explained: «Mahdi Akef and I were friends. What happened? We were together in Wahat prison. He spent there seventeen years, while I spent fourteen years. When he later became the Supreme Guide he started coming to me trying to open a channel of communication. Once I whispered him: «You will never rule this country, do not think about it.» He replied: «You are naive. I do not want to be the leader [of the country], but when all the women will wear the veil and all men will wear the beard, they will pray me to be their leader.»

That passage represents the «moderate» side of the Muslim Brotherhood; that is, moderate and gradual in getting results.

To go back to the «true nature» of the Muslim Brotherhood, the first word of a Koranic verse appears in the official logo of the Brotherhood: «And prepare against them whatever you are able of power and of steeds of war by which you may terrify the enemy of Allah and your enemy and others besides them whom you do not know [but] whom Allah knows. And whatever you spend in the cause of Allah will be fully repaid to you, and you will not be wronged» (Surat al-Anfal, 60). Incidentally, the term «terrify» (turhibuna) has the same root as the Arabic word irhab, that is «terrorism.» The meaning of the verse for the Muslim Brotherhood is explained in the Koranic commentary In the Shade of the Koran by Sayyid Qutb, the chief ideologue of the Muslim Brotherhood:

The objective, then, is to strike terror into the hearts of God’s enemies, who are also the enemies of the advocates of Islam throughout the world, be they open with their hostility and known to the Muslim community, or others who may be discreet with their real feelings, not openly stating their hostile attitude to Islam. God is certainly aware of their true feelings and sympathies. Such people are intimidated by the might of Islam even though they may not suffer its consequences directly. The Muslims are required to gather all the strength they can have so that they remain feared by other people. This is essential so that God’s word remains supreme and all submission is to God alone. […] Acquiring such forces and having them ready can only be done if the resources are there. Since the Islamic system lays much stress on collective responsibility and mutual support, the duty of jihād goes hand in hand with the duty of spending money for God’s cause: ‘Whatever you may spend in God’s cause shall be repaid to you in full, and you shall not be wronged.’ (Verse 60) Both jihād and spending money for God’s cause are thus purged of all worldly and personal aims and purposes as well as all national and community feelings and aspirations. They must always be pure, undertaken ‘for God’s cause,’ to establish His authority and to earn His pleasure.

The link of this Koranic verse with jihad, which is the main argument of the Qur’an’s Surat al-Anfal, should remove any doubt, if there was any, about the meaning of the expression «terrify.» 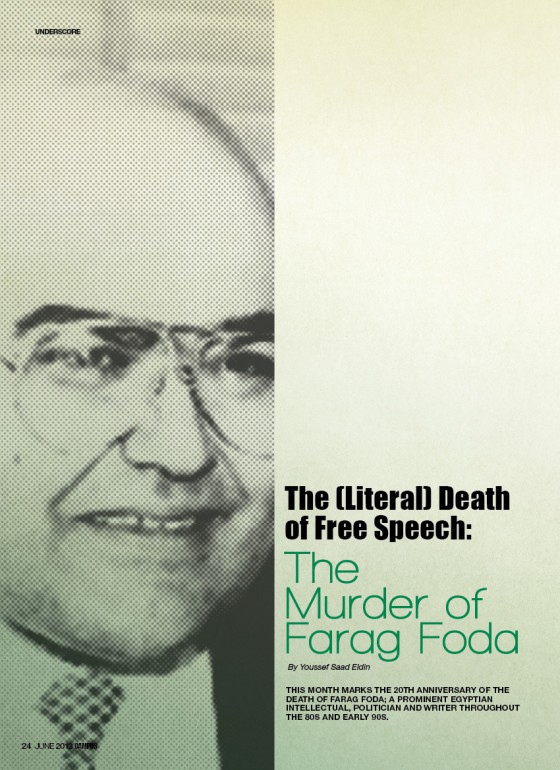 The Egyptian intellectual Farag Foda, murdered by Islamists in 1992, wrote in his book Terrorism [al- Irhab]: «Political and religious terrorism began with the birth of the Muslim Brotherhood, when the oath of allegiance to [the organization] was recited on the Koran and on the ‘gun’ as pointed out by the Supreme Guide Abu Nasr in his memoirs published in the newspaper al-Ahrar where he told that, when Abu Nasr drew his pistol saying that the gun was the solution, Hasan al-Banna brightened and cheered immensely. » (p. 39)

This is, like it or not, the background and the «true nature» of the Muslim Brotherhood. If there are shades, and there are, they are mere adaptations, adjustments based on pragmatism, but its final aim is the one expressed above by the former Supreme Guide Mahdi Akef.

On April 4 Ibrahim Munir, who has been living for twenty years in London and is considered the head of the movement in Europe, was interviewed by the Egyptian daily, Al-Masry al-Yom. «The British government,» he said, «knows that I am a member of the Office of the Guidance of the Muslim Brotherhood, and I’m not ashamed of being described as such. The British government knows who comes and visits us, who shares our way of thinking, because, either directly or indirectly, it follows and controls us, contacting me and the movement, and in many other ways.»

Munir was also very clear in his description of the Muslim Brotherhood in Europe: «The Islamic method in Europe is different, it is a completely different and independent structure which is called the Federation of Islamic Organisations in Europe (FIOE). It is registered at the European Union, it has an office in Brussels and is known at the European level. On this basis, they cooperate. We must obey the laws of our countries and they must obey the laws of their countries. In all European countries, there are Islamic organizations that convey the message of the Muslim Brotherhood and others that do not. All of these organizations are working for the benefit of their country and according to the laws of that country.»

As for the London office, Munir insists that it is «a research association registered with the British government.»

The message is clear: the Muslim Brotherhood is an established reality recognized by European institutions.

The global Muslim Brotherhood is once again taking advantage of the relativism of West to impose, in a smart and silent way, its own absolutism, as predicted by Yusuf al-Qaradawi.

The Brotherhood is ready to react in a «democratic» way, that is, in legal terms, to the possibility of being defined as a «terrorist organization» by the British government. They are «lawyering up.» Approximately $31 million has already been paid to a team of local lawyers, according to the journalist Adel Darwish in Al-Sharq al-Awsat on April 5.

Now all that remains, as Churchill predicted, is to see which appeaser the crocodile eats last.