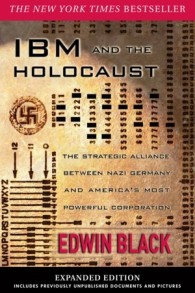 Black said all of his projects would make good movies because of his insistence on factual integrity. “IBM and the Holocaust,” he said, exposed what had been “the overlooked saga of how an American corporation became a central player in the Holocaust in all six phases.” He listed these as “the identification of the Jews; their exclusion from society; the confiscation of their assets; their ghettoization; their deportation; and even many parts of the extermination of the Jews.”

IBM, he noted, “had a customer site, known as the Hollerith Department, in almost every concentration camp” to sort or process punch cards and track prisoners. IBM also “opened subsidiaries in Europe in cadence with the Nazis.”

Black’s book details IBM’s strategic alliance with the Nazis starting from 1933, soon after Adolf Hitler came to power, and continuing deep into World War II. “As the Third Reich embarked upon its plan of conquest and genocide, IBM and its subsidiaries helped create enabling technologies, step-by-step,” according to the book’s official website. “IBM technology was used to organize nearly everything in Germany and then Nazi Europe, from the identification of the Jews in censuses, registrations, and ancestral tracing programs to the running of railroads and organizing of concentration camp slave labor.”